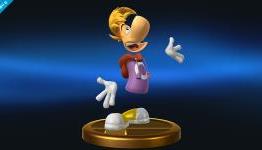 Rayman Makes An Appearance In Super Smash Bros For Wii U

Like with Brawl, Sakurai will be providing daily updates on the development progress of Super Smash Bros For Wii U and 3DS through Miiverse.

Today, Sakurai confirmed that Rayman will make an appearance in Super Smash Bros For Wii U and 3DS.

I was hoping he would be a playable character :(

Maybe later on tonight he will be confirmed

Only so I can beat him up for stiching up us wii u owners around launch. Rayman your going down !!

I doubt they will reveal him, would be cool tho. I'm hoping it's a character that wasn't mentioned in the leak, but with the Xenoblade developer Retweeting the upcoming reveal, I think it's safe to say it's Shulk.

A new character playable is supposed to be revealed today I find it kind of weird that he decided to share this pic today, even though it's most likely that Shulk from Xenoblade is going to be revealed I find it very interesting that they would ask for third party right for him to be in the game and not have him as a playable character.

I click in to see if he's also a character on 3DS, just to find out he's not playable in either. Disappoint.

Will Rayman be a character we can play on Smash bros for PS4 or Xbox One? Obvious joke. The title didn't need to specify that it is a Wii U game. Just made me laugh.

why would they do that? that is such a missed opportunity.

hopefully they later announce he's in the game, otherwise its completely pointless.

A Trophy ? I haven't been this upset since Conker was announce as a teaser for Project Spark.

Oh, c'mon, this isn't anywhere near the level of heartless trolling as the Conker/Project Spark thing (though having Rayman as a playable character would be awesome).

Thing is Rayman could still be playable. You never know. They don't just let any character in the game even a trophy unless a character from the company is in the game.

What emotion am i feeling...? Its a mixture of sadness, anger, confusion, nausea.... and heart break...

Well said man! Its like on the head thanks internet hahaha! But on topic rayman does deserve props he does have good tenure in my book and I enjoyed his games. Now the troll side of me says this is free publicity considering he aint playable but believe me I say this with mixed feelings as my comment reflects.

And it's now Nintendo's turn to include a character in a game in a totally non satisfying way. In the last month or so we've had Conker included in Project Spark, Patapon being playable in Destiny of Spirits and now Rayman is in Smash Bros, as a trophy.

But who knows, maybe these crossovers will lead to better things; Rayman could be included in Smash Bros at some point, Conker could get a true revival and Patapon might finally make its way to the Vita.

You forgot to add a Resistance roster character in PS All-Stars. The game had background characters, levels, character icons, and more from the series but not a single playable character from it. If they made Radec work, I don't see how a Resistance character couldn't.

Gun focused characters aren't quite as easy to balance. I could see a Resistance monster make an appearance either as a playable character or have a stage where it's one of the giant monsters in the background.

Who said there would not be an Ubisoft character playable?

The way I see it,
it is just one less Company Mascot for Samus to kick off a ledge.

Could be the character fighting. Rayman creators have a great relationship with Nintendo, not talking about Ubisoft, the developers were pissed by the decision of the publisher to delay Rayman Legends for Wii U. Let's forget it, the game is awesome.

Rayman would def be great as a playable character.

Is that the character announcement that was teased last week? I thought they would be introducing another playable character to the fighter roster.

the character will be announced live in 40min in the smash bros website. It could be Rayman, most likely its Shulk, though it could be anyone (or more than 1 character for all we know)

He could still be in, which i suppose brings life back into Wonder Red too.