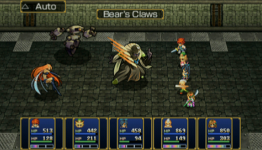 For the last several years, Kemco has released JRPG title after title, with only recently a lot of them making it to Android and IOS devices in the West. Although, the in game translations done leave a lot to be desired. That’s where companies like Natsume come in. They take on the taxing job of not only localizing the various ports of some of these games, but they translate them in such a way that one wonders why they haven’t been hired to localize all the other smartphone games. Still, Natsume tackling the PSP port of End of Aspirations and rechristening it End of Serenity is interesting. Apparently PSP While the game is serviceable. The renamed title doesn’t provide much context within the game.

Adhttps://store.steampowered.com/app/1488200/Symphony_of_War_The_Nephilim_Saga/?utm_source=n4g&utm_medium=native&utm_campaign=sow_n4g_native&utm_content=png
- Comments (0)+ Comments (0)
TopNewestOldest
The story is too old to be commented.
10°

Natsume Announces End Of Serenity Will Come To Vita