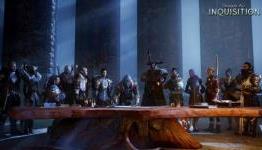 Dragon Age: Inquisition - These are your companions

Here are all your Dragon Age: Inquisition characters. Bioware has featured an all new character cast, including a proper homosexual male.

Way to go Bioware on bringing such diversity to the game.

Seems like a change in diversity and will be well supported by gamers. A times they are a changing.

mooi man, i like. Looking great, enjoyed this series a lot, hope this one delivers

I loved dragon age 1, 2 was a bit underwhelming, hopefully 3 will be great it looks like being so from what we seen so far.

Well I think they're on the right track with the diverse range of characters, if nothing else. It's really the main reason I enjoy the Bioware games; its an oppurtunity to interact with a really eclectic crew.

Looks great yes. Plays great, I'm not sure till I get the chance to take it on. I still long for KOTOR.

I think you will be pleasantly impressed. Some of the gameplay I've seen impressed me anyway.

@TheTowelBoy - I hope you're right. I have always been a fan of Bioware.

I may be in the minority, but I already hate pretty much every companion except Varric, Blackwall and Iron Bull.
A shame as the game mechanics seem to be a huge improvement.

What specifically do you dislike?

I dislike that Dorian hates his own people (it would be cool to have someone who actually stands up somewhat for the Tevinter Imperium, as that would add an interesting moral dynamic to the party, so missed potential here).

Cole seems to be a weird, "misunderstood" emo stereotype.

Cassandra is too devout a templar (and I always play a pro-apostate, anti-establishment character).

Vivienne is far too pro-circle, which places her not far off Cassandra in being strongly pro-establishment.

Solas' head makes me feel uneasy (but OK other than that he's not so bad).

Sera I hate the existence of as I would have liked a hetero-male anti-establishment romantic subplot (on a side note an estimated 0.7% of the population are strictly lesbian females; there are more bisexual women than homosexual, so I feel they should have made her bi, and this wouldn't have harmed anyone).

Apparantly you'l be able to complete the game with just one companion, so you're in luck.

And the great thing with this kind of game is that you aren't forced to use any one character, you can pick the team that works for you.

I remember killing of a core character who was meant to be a a companion in Origins and having to start from scratch again :(

Bioware rattle on about discrimination and diversity, yet all their characters look like models. Physical profiling is the accepted 'face' of discrimination.

First of all, the characters aren't that physically perfect.

Secondly, what's wrong with a game full of beautiful people? Having men and women who are nice to look at makes the game more enjoyable and less uncomfortable, and it's fantasy anyway, so this sort of thing is expected.

Youre more comfortable with better looking people ? back to the hair salon with you, boyfriend.