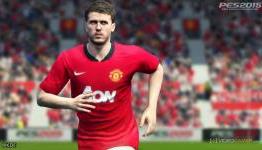 Konami has admitted that its focus on visuals for last year's PES 2014 damaged the final product, leading to a game that was only "half done" and "extremely unhappy" fan feedback.

Every year the same thing by Konami...

Huhh, it's a sports game.
It's not like they're going to delay it until 2016..
They have one year to get it right.

Less features in PES 2014 than normal, you can tell, but the gameplay is by far the best I've ever played for a soccer game.

I'm in my 5th season and I'm still seeing goals, and touches,tricks& animations that are ALL NEW.

Never had 2 games even close to similar either, & the ball physics is the best it's ever been in any sports games.

They got a lot right here, but in return, they cut a lot of meat from the Manager Mode, which was missed.

Training young talent was more difficult than ever and it taking 4-6 years from players to improve 4-5 points is just stupid.

Other than that, I LOVE this game.

Yea because Donkey Kong Country games are all so different right? c'mon grumpy

I am playing Konami football games from the Arcade era and I am still playing, I appreciate Pro Evoltuion series but I don't find the so good today as the first 4 games of the series on PS2. I think Konami followed Fifa road...

They should of just tweaked pes 2013 awesome game and it looked better than 2014.pes2013 with next gen gfx's please

That's why I stick to FIFA.

Yep me too. My PES days died along with the last decent game they released in PES6. Fifa took over whist they stood still & they have been getting a kicking ever since.

Yes pes 2013 was great, totally they should just have used 2013 as a guideline for 2014 and 2015, how can you trust konami now, same thing year after year, they say allot of fancy words and then its just worse

I know this may come across as superficial...but I always preferred the feel of PES. But I'm lured over to Fifa because I cannot stand to play without full licensing.

Not really. That's your preference. Many people have done the same thing over the years. I used to play them both when they were on differing release rotations. Now, it's up to the demo to determine which one I buy. (or I stick to an alternating schedule if I feel that they are both good).

Im willing to skip fifa 15 if pes brings it this time. At least they acknowledge previous faults.

They admit that 2014 PES was "half done" how does that fill me and everyone else with confidence about PES 2015? BAD PR!

What does it change ? Everyone knows it was not even half done . Ignoring it and lying about it , among other lies they keep telling is insulting , and worse that pretending everything was A-OK

I will be going with FIFA 15, although it has to be said, props to konami admitting it was a shoddy game last year. Hope they deliver this time round.

Anybody who played PES 2014 could tell that it just didn't have enough time. It lacked the responsiveness and fluidity necessary to be close to finished. That being said, it also had some hints towards what the future of PES could be like, IF they get it right.
My hope is that it was just the devs grappling with the new engines. Much like FIFA was a bit of a mixed bad when they introduced the Ignite engine into the game, I think that the Fox engine combined with the MASS engine might have been a bigger task than first expected. Especially considering that the Fox engine was designed with the current generation in mind. Hopefully, they get it right and return to the solid gameplay that they were once known for. As of right now, PES 2013 is as close as they have ever come to that.

I don't personally think the ignite engine on Fifa 14 was a mixed bag. I think it's a great game on PS4 & the added touched they are making for Fifa 15 looks to be an even better experience. We need Konami to keep pushing as competition is what has made Fifa the game it is today. PES was always IMO a better game, but give Fifa it's due, it kept pushing eventually destroying PES in everything from licenses to sales. Whilst PES stood still Fifa pushed on ahead. Let's hope for a good PES this year, but I won't hold my breath

If I'm not mistaken, Ignite actually was introduced on the 2013 version of FIFA. However, by FIFA 14, it was actually integrated very well. FIFA 15 looks to continue this momentum in the best ways possible. That being said, while FIFA has all the licenses and sales, it sometimes felt a bit scripted. (which has gotten better over the years) There was something different about the feel of PES. It felt a bit more random (don't know if that's the word that I'm looking for) and less predictable.
As I said, I have fully supported FIFA in the past, as I have with PES, and I just really want competition to keep pushing the sport forward...regardless of which game does it. My hope is that PES presents actual competition, from a game play standpoint. But, I am also keenly aware of the fact that it just might not happen.

*lets be honest here both fifa and pes in the last few years have sucked and neither were worthy of purchasing..now what i do know is if pes catches the magic of the early years everyone will play pes because it will just be the bETTER GAME but thats only if they capture the MAGIC!!

Last time I bought a PES or a FiFa game was during PS2 era, they used to be fun.
The PS3's and 4's only have good graphics thats all

Maybe they should refund half the money then!!!

Am I among the only ones who still has faith in Konami.

Hey remember PES 2014? well it was shit but we promise that the next one is better so please please buy it

Konami teases reveals for games it says are ‘quietly underway’

Konami feels the ‘winds of change,’ as Silent Hill is just the beginning