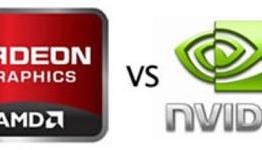 Why AMD and Nvidia are fighting?

These two companies have been going at it for as long as they have been out in the GPU market. The recent development to kick this feud even more is AMD thinks Nvidia is being unfair with Gameworks in order to gain leverage with top tier developers. Will these two ever be friends?

Money is the reason..

It was just simple fighting. But the real war ignited over Watch Dogs' Nvidia exclusivity on PC (which is suspicious to say the least because the game is fully optimized for AMD-built 8th gen consoles). AMD claims that Nvidia is looking to completely divide the PC gaming market. Hardware incompatibility is what originally caused a decline in PC gaming, and what can turn into a console-war scenario can damage PC gaming again.
I'm not taking AMD's side on this. They're doing the same exact thing with the Mantle API, but AMD claims this doesn't completely lock out developers from using competitor hardware. (Which I cannot fully justify since BF4, Thief, and BE: Hardline run like mediocre on my GTX660 machine)
It's again, the nature of business for AMD and Nvidia to fight like "console peasants" but what they do now can hurt PC gaming in general.

Nvidia is not perfect, but AMD is just desperately trying to discredit them. Nvidia is just better at supporting developers, when there's a new game in the works. Not to mention they're much more interested in the PC market as a whole.

Lets just face it, AMD hasn't pulled a great product out of their ass now for about 5 years. Their CPU range has gone to shit of the last 3-4 generations while every decent GPU they drop runs hot and loud to compete with what nVidia has on offer.

nVidia products are inherently, quicker, cooler, quieter and last longer with better driver support. However they do cost a bit more. But it is more than worth it. I will never go back to an AMD CPU or GPU.

The only thing to be excited about for AMD is low TPW APU's that can render UHD for TV and movies. Other than that it's all low end laptop and console gear which isn't very groundbreaking at all.

But we do need AMD to keep the pressure on those 2, AMD will always be 3rd place budget gear.

That punctuation... or lack thereof.

Because they're in the same market which means they're competitors...

Pretty much the same reason Sony and Microsoft get along so well.

Technically Sony and MS do get along as for many years Sony built hardware that ran on MS software.

Interesting... I never knew that. I guess it's kind of like how car makers, although competing, use each others' products and rebrand them. (i.e. Pontiac Vibe is just a Toyota Matrix built with a different body and stamped Pontiac, Mazda b2200 is just a Ford Ranger, etc..)

You never heard of the Sony Vaio computers they ran on windows.

I was being closed-minded, solely thinking xbox vs ps. Don't mind me. Just not thinking today lol. :P Of course I've heard of a Sony Vaio, just wasn't thinking about the obvious you just pointed out. /facepalm <shakes head>

I refuse to edit the stupidity out of my comment above hahah... i'll just soak in the embarrassment. :P

"Interesting... I never knew that. I guess it's kind of like how car makers, although competing, use each others' products and rebrand them."

yup. I hear samsung build the LCD/LED screens that sony use in there bravias too.

Just as you brought up cars (guessing your a car guy), did you know he next gen aston martins will be using custom AMG engines/drive trains?

AMD used NVidia graphics until they acquired ATI graphics, thus becoming a competitor to them. They got along with each other rather well up until then. Then NVidia was "all up in their grill".

Was that before or after they caught Nividia gpu's auto downclocking themselves when they detected a AMD cpu.

I had not heard of that one. but I do recall NVidia PhysiX is turned off on Nvidia gpu's if they detect an AMD gpu.

People are only reading the headline and not the article...

The story isn't actually asking why they are fighting, they are competitors of course. The article is about why they are rivals and recent developments that has made the fighting more intense. From their inception to modern day.

Can't blame them, it's a Kotaku article.

No shit. Wasn't what the article was about.

Regardless these two will always be fighting to gain an edge over the other, the competition has been good for the consumer.

Nvidia is, and always will be my go to. Love the performance and my Shield is a godsend.

because f u give me money

it sounds to me NVidia's main aim is to find ways to completely kill its competitor, this will not benefit the consumer in any way.

we need AMD in the market to maintain the balance. I wish there was a 3rd GPU company.

I miss the days of 3dfx and powerVR.

That's the goal of capitalism is to eliminate their competition.

The goal of capitalism is constant growth. Not forcing your competition out of business. Because ANY savvy businessman knows that without competition your growth is severely crippled.

No that's stupid as a businessman you don't want competition and also the goal is to make a product that would make everyone buy your products instead.

No one goes into business and says, "Wow, well I want some good competition and want everyone to have equal marketshare and share profits....

Google doesn't have competition in the mobile space yet continues to innovate. It depends on the mission of the company.

Capitalism...it's a cruel world out there...

PC gamers will win, both Nvidia and AMD will release even more faster & cheaper cards than scheduled in an attempt to 1 up each other.

Which is bad. Because if they rush to shovel out more hardware they'll be putting out lackluster hardware full of driver issues and if it gets real bad we may see the infamous Athlon problem again.
(For those who don't know some of the earlier Athlon models would overheat on baseclock because they had AWFUL stock fans)

Agree 0Disagree 0
▼✖-+
SPAMInappropriate
Show all comments (37)
The story is too old to be commented.
40°Fresh