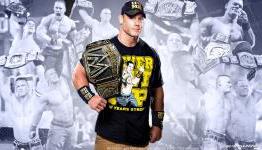 DualShockers writes, "Wrestling marks lend me your ears! Announced during the June 30th episode (#1,101) of Monday Night Raw, WWE 2K15′s cover will be graced by none other than the infamous John Cena."

Why John Cena for the millionth time? First he wins the title for the 15th time and now this? I don't hate the guy, just sick of seeing him all the time!

1.This is the first time he's been champion since summerslam last year.

3. He hasn't been in the main event since TLC.

I haven't watched WWE in several months but they often went out of their way to show Cena even after Summerslam and TLC. He cannot go one year without holding the title once or twice. Being a 15-time champion over the course of nine years is very annoying. Even more so due to his superman character getting having been stale for the better part of the decade.

Errr but people want some new. Cena's been blasted in our faces so many times since 2005.

Roman Reigns is a guy that's new and fresh. A guy who has never been Champion, never been on a cover for a game before and only main evented Money in the Bank with 7 other people.

See what happens when you don't have CM Punk around?

Roman Reigns isn't proven yet. He could very well be the next Ryback.

Its all about how they book him. Ryback could have been successful. So many guys could be sucesses but then they get fed to the 15 time champion john cena

Reigns gets a great fan reaction, but his technical prowess isn't there yet to carry a main event of a PPV as a singles wrestler. Plus he is hard to book as a face due to his size - he's more of the monster heel archetype.

Not a fan of him myself.

He probably has contractual powers like Hulk Hogan did to affect the story and make himself the winner all of the time.

Just sick of him hogging all the spotlight.

That's what wrestlers do. They're attention whores.

I meant him taking spotlight away from other more talented wrestlers. John Cena sucks.

This Is Great News!!!

No it's not. I don't want Cena's big meaty pudgy face watching me untill WWE 2k16. Like others have said, i'm tired of Cena. I think i'll skip this one.

^^^ haha ok maybe I overreacted on that. I'll probably still get it if my budget allows. But I still don't like the Cena cover very much.

So it's true? I thought Steph and HHH we're just trolling Cena. I'm tired of Cena.

Guys lets face it... He is special to the business of professional wrestling. There is noone bigger in the game today. Punk was ascending and HHH was screwing him. DB is on the bench. Reigns, Rollins, Bray and Ambrose need time... There is no one else and don't mention the most successful failure Randy Orton who should be and could have been the next Rock but no HHH again screwed him up mentally. The biggest error in WWE history was HHH marrying Stephanie. WWE would be so different with Shane as the head manipulator.

Cenas been the face for years . It's best that way . Watch when he retires it's going to go down hill nobody over the 9 years has been able to do what he does . He' is the best main event man in the game sense the early 2000s

What does he do exactly? Cut cheesy promos? Draw millions of hardcore fans away? Botch moves? go over talented guys who could be the next best thing?

thain he did give DB a title shot and he lost to Punk many times and Punk was untouchable for 2011 you have to be fair guys who deserve it in every way he will put over. Meaning anyone who will screw with HHH like Punk and in many ways DB.

I want to see if next gen is anything to write home about. I still remember playing the 2007 game with friends. I'm not too fond of the actual product but the games are quite fun.

People complain about cena . Yet he's the only reason to watch wwe . Daniel Bryan's a joke . He's way to small for his body to hold up the constant injury he's going to have . Same thing happened to Rey mysterio dude can't stay healthy and won't be able too l rather see cena then Bryan any day

People watched WWE for legends. I stopped watched WWE because Cena was starting to annoy the crap out of me.

Your obviously some kind of stupid . Because cena has the best main events when he's champion . People who always want him replaced , are obviously people who know nothing about sports or competing in general . There's a reason they have John cena always at the top Even if it is a fake sport . He's the top dog and will continue to be till someone takes it . They need to go back to the weight divisions. Because only true heavyweights should be aloud to compete for the heavy weight championship like it use to be . People who never played sports don't even realize how straining it is on a body . There's a reason why champions stay champions and it's hard to stay on top

Your talking like you think it is real. I was in the business for many years and even owned my own wrestling fed for a few years. Cena is put over because, like him or not, he is the only guy they have working for them that advertisers request by name. He alone, has brought WWE in some major money. Though, Cena is a great guy and looks out for others in the locker room. He is the reason why Daniel Bryan got the push he did and loves giving the smaller guys air time because he enjoys the faster paced matches that the bigger guys cannot do.

Cena stepped aside for a years, so smaller guys like Punk and Bryan could get their time at the top. It was only due to advertisers requests that he had to step up to that spot again, to hold the title. Cena is the 2000s Hulk Hogan. A big draw for the WWE. Without him, there is no top guy. Im not a huge fan of his limited move set, but he performs it with absolute precision and can always run a match smoothly... With little error.

Ryback was knocked back, like Dolph Ziggler, because they thought they deserved more than they were getting and ran their mouths any chance they got. You never talk like you know more than Vince. It is a quick way to lose whatever footing they gave you and be taken back to filler match status, if not completely let go from the company.

Reigns is the next guy who will get a major push, but he needs a little more time to mature and assure management that he can stay healthy and clean, before they give him a run at the top. But, he is not Cena. Hes not a bad looking guy, but he doesnt have that instantly Beaver Cleaverish personality that Cena has, that draws in the advertisers to make them want to spend major $$$. Those sorts of personalities, generally only come along once every ten years or more. Look at the history of the WWE for example. Hogan, Rock, Cena. Austin was too edgy to really draw the advertisers, attitude era or not. Bret Hart had little charisma outside the ring that made him a draw for them.

Daniel Bryan is one of the abnormalities that grabbed huge fan appreciation from the start, that sort of put Vince in a corner. Something he hates. He had to give hime the title, as he was getting over bigger than the top main eventers and could outmatch them with an unlimited set of moves. Vince struggled with it for years, as he didnt want to put Bryan over before other bigger guys had a run. Im sure, when Bryan got hurt, it was a huge relief for management... As it allowed them to put a true heavyweight behind the title again. Something that both HHH and Vince believe in. When Bryan does come back though, it will put Vince in another huge predicament. Because his own champion, Cena, wants Bryan behind that title and would surely love to be the one to put him over for it. Which would set up Bryan and Reigns for Wrestlemania next year. Though, word has it that HHH wants another run and could be the one to take it from Bryan and face Reigns in the main event of Wrestlemania. Right behind Sting and The Undertaker.

If Cena retires, it puts Vince in a tough spot... Because he then has to find another person to fill his shoes. Which is much easier said, than done.

Vince Mcmahon should be the cover Athlete.

They should have a reverse cover like last year. Not too happy about this cover.

after rock steve Austin left I was done with wrestling

The Champ is Here.

I guess having Cena on the cover means WWE 2K15 is just the same old same old. I'm so tired of Cena, the WWE trolled their fans at the MITB PPV.

They need to bring back the heel Cena.

Hopefully there are alternative covers, cant be bothered with that bell end on the front.

I rather a Woman on a cover as i am heterosexual.

Are Wrestling Games Getting Worse?