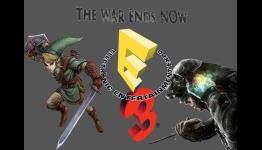 E3 Rumors Gamers Should be Most Excited to See Come True

In just over two months E3 will once again be upon us, and there are a lot of murmurs around the web about what gamers can expect to see. Numerous sequels are up for grabs and in most cases far flung dreams collide with what gamers have desperately asked for sometimes for years to create eventual disappointment. Still, amazing things happen every E3 and here’s a short list of what some think we will see come June.

At this point I do not think Zelda Wii U can be considered rumored to be at E3 since Nintendo has stated it will be shown. Unlike the author I believe Zelda Wii U will release early 2015 at the latest since they almost showed it last E3.

Yes on the Zelda tip. It is said to be the biggest, most costly game, and largest team Nintendo has ever used on ANY game ever. So yeah it will be shown this year.

I am wondering if Miyamoto's new IP he has been working on for years now will be shown. It has been pretty hush, hush for the past year or more, at least as far as I have seen.

I am also wondering about the new Fatal Frame game that has been announced along with the new movie.

It would also be cool to see Eternal Darkness shown as a secret project, and yes I know it was canned, that is why I say secret. Nintendo did renew the IP last year and they only have a certain amount of time to do something with it or they will lose the IP.

I don't know how I let Miyamoto's new IP slip my mind. I hope we get at least a tease of what he has been working on.
The new Fatal Frame looks to be pretty good (even though I've never played one) but I hope they don't spend too much time on it at E3.
As for the Eternal Darkness IP they may have just renewed it in order to keep the name if they decide to do something with it. Would I like to see a new Eternal Darkness? Absolutely. But at this time I doubt we will hear or see anything about it

Microsoft Acquisition of Activision-Blizzard Has Been Approved in Brazil