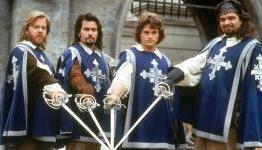 Ubisoft are rumoured to show off two demos for Assasin's Creed Unity at E3 this year, one for the games single player, another for the multiplayer mode - which is also rumoured to be a four player co-op experience.

Are the Musketeers incoming?

If it has campaign co-op, not some knockoff mode, this will be the 1st AC i ever purchased. Im a sucker for co-op. I don;t play single player games. Just my opinion.

AC has had some good games even without coop. I would recommend AC2 in particular and I've heard Black Flag is also really good.

Absolutely, but the multiplayer mode could be completely separate from the single player campaign. It'd be pretty fun though, right?

The problem is that there are 150 years between the two periods. Paris changed from an era of extreme wealth to almost abject poverty.

They'd need to model two separate cities for the two mode, which isn't going to happen.

An homage to them wouldn't be far fetched tho ;)

Can't they just focus on a single player campaign without adding co-op features, I'd rather have features which will enhance the single player.

I mean we already have multiplayer, we don't need co-op AND multiplayer do we.

*sighs* you are such a downer , aren't you one bit intrigued how four player co-op would work in a AC world? Ubisoft has the luxury to focus on all 3 modes at the same time , why not use it..

I'm a downer because I don't want them to add co-op to a single player driven game....really?

They have multiplayer, what would be the point in adding co-op.

Most people think co-op is a simple thing to add, you just flip a switch and press a few buttons here and there and BAM...co-op. But it's not like that at all, it takes a lot of time and work to add it and in my opinion I would like them to use that time instead on adding single player features to enhance the single player for us. If they adding co-op in AC4 Black Flag then I don't think the naval combat would of been as refined as it was since AC3 for example.

So no I'm not intrigued, if they want a co-op game then they should make a game with co-op built up around it. No point tacking it in somewhere where it doesn't really belong.

yea I agree with NoMercyOnlyRage. AC got started getting monotonous after the 2nd game. Let the team try out new things.
"They have multiplayer, what would be the point in adding co-op." That's why I hope the flesh it out and maybe make missions and modes that center around co-op. Hopefully it's not like Drop-in/out co-op like Borderlands which is really uninspired.

Uncharted 2 & 3 had co-op AND single-player, and they're two amazing games.

im fine with co op as long as it doesnt detract from the main game.

Coop is generally more fun to me than single player if the experience supports it. Friends make games more fun IMO.

Maybe the writer should have done some research before posting something like this. The time periods don't match at all. He saw "French" and "multiplayer" and thought about the only thing he knows about French history. Shame it's not even historical fact. But still, the story was set in a period of time and that isn't what is being portrayed in the game.

Just for future writings you should do a little more research.

No way.... the musketeers are a totally fictional story. Expect from the main protagonist AC was always about historical accuracy

I think you mean applying fiction to history, in which case it's not technically accurate at all. George Washington was a pretty bad guy in ACIII from what I remember.

Yeah - i guess. Sorry I'm not a native speaker

co-op games are the best, sad they dont make alot more of them, we need more fokus on that, instead of all that boring multiplayer they just put in so its there.

This Week's Deals With Gold And Spotlight Sale

All Guns Blazing: A deep dive into the production of Criterion’s Black, and its cancelled sequel