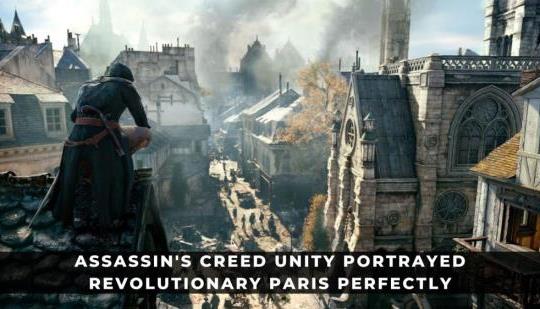 Being a game renowned for its bugs and glitches, Assassin's Creed Unity still has a lot to offer players, especially with its beautifully designed open world. The majority of the game takes place in the city of Paris, which is filled with amazingly accurate details of the French Revolutionary era. This makes it a unique game like no other.

Adhttps://store.steampowered.com/app/1488200/Symphony_of_War_The_Nephilim_Saga/?utm_source=n4g&utm_medium=native&utm_campaign=sow_n4g_native&utm_content=png
- Comments (6)+ Comments (6)
TopNewestOldest
Expand all
The story is too old to be commented.

If Ubisoft ever started remaking/remastering the AC games for PS5 this would be at the top of my list. Apart from the bugs its actually are really good game

The last AC I really dug, thought it looked stunning and I didn't experience any glitches or anything, would love to see it remade.

If I remember correctly, all the residents spoke English in cockney accents, and no I'm not getting confused with AC Syndicate.

I liked this game (I only played it after it was fully patched), but it does have some issues.

The modern day story was non-existent, which greatly disappointed me, especially since it was the same case as the previous two games.

The combat was very stale by this point, it was the same as III, IV, Rogue. So four games in four years with the same ho-hum combat, and with each passing year, it got increasingly stale.

This and Syndicate were the last two games I enjoyed in the series. Origins went into the wrong direction, Odyssey doubled down on everything I didn't like, and then I moved on from the series. Never played Valhalla, doubt I ever will.

This Week's Deals With Gold And Spotlight Sale