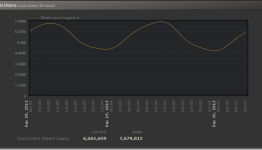 More people are playing PC games than ever

According to the official Steam & Game Stats page for Valve’s game distribution service, the number of concurrent Steam users hit an all-time high on 12/29/13 with a peak of 7,679,815.

you should keep in mind though that gaming habits on PC are completely different. people tend to use their PC for other stuff most of the time while having steam open in the background meanwhile on consoles if some one turns the console on it will be for the soul purpose of playing games. its hard to have an idea of what this difference in gaming habit make between pc and console but i would imagine it has some part in the difference between total users and concurrent users

Generation 6= Generation 8. PS4 domination is going to put PC gaming back into the closet. Generation 6 was when lots of PC gamers transitioned to the consoles.

Extraordinary claims require extraordinary evidence. However I assume you're not a fan of that ;)

Haha you're a funny guy. Your devotion to Sony is commendable, they should hire you.

But you're off your rocker. PC gaming has been growing dramatically. I'll eventually get a PS4 when the price drops and there are a handful of exclusives I want to play, but I guarantee I, and many others, will continue to happily game on our PCs.

You do have a point that PC gamers may have Steam open in the background while they do other things but you couldn't be more wrong about consoles.

PS3 became wildly popular with non gamers for it's Blu-Ray Player and Netflix has been used an awful lot on consoles. I believe there was an article a while ago that showed statistics that people were watching movies almost as much as they were playing games.

Who would of thought That Steam has this many users!

I'm not surprised at all. A digital store with fantastic deals; it's an easy choice to choice Steam. Gone are the days in which you have to pay outrageous prices for software and they have been gone for quite some time.

"Gone are the days in which you have to pay outrageous prices for software and they have been gone for quite some time."

Unless you buy a console, then you can pay £55 for a game + internet tax to actually play it!

Now lets show how many times each of those users pirate.

Right back at you with console users. Console gamers aren't all angels either.

I have 700+ games on steam. I guess I'm a pirate too by your low standards.

Yeah, but which platform has the most? Its pretty obvious. Whats your resell value in those 700+ games?

Whats YOUR resale value in the game you paid 40-60 bucks for? $5 at best at gamestop etc? As PC games go I have probably paid between 10-20 for the same AAA title you got hosed for (and the PC version still looks and plays better). So do the math and see who still comes out ahead financially...It sure as hell isn't you and your console. Not to mention we PC folk can ALWAYS play our OLDER titles FOREVER if we so choose and they are ALWAYS compatible so why would we need to sell them? Console users NEED to sell their overpriced games to shell out for the next overpriced console or overpriced game. PC's generally dont brick or become obsolete as a console does and therefore, simply put we don't NEED to sell.

And how many console users pirate games?

Tons my friend. More than you could possibly imagine. If you dont care about the crappy console online community, it doesn't take much to modify your last gen system to play almost any game for the price of a dual layer disc($1-$1.50).

Those figures can be misleading, I signed up for Steam a while ago for a single game but I only really played the game for a few days.

Great service but like PSN, subscriptions/sign ups don't = user base.

Those are ACTIVE users online. The steam user base is MUCH larger than that.

what? the article is specifically talking about concurrent users people using the service at any one time not the number of people who signed up for steam did you even bother reading past the title? steam has about 65 -70 mill registered users if you were wondering and considering that PC is an open platform and that steam isn't the ONLY place you can play games on pc and doesn't account for every pc gamer that is quite impressive

That's true as a lot of us with Steam have it running in the background while not necessarily playing a game. However even now there are currently 5,984,710 Steam users logged on while 1,319,872 of them are in-game (from Community page).

Plus if you take into account that there are huge communities of gamers outside of Steam (especially MMOs--in particular outside of those released in US) its just a fraction of what actual PC gamers exist in the world. PSN/XBL user accounts make it much easier to estimate than PC gamer statistics but neither will be perfect (as some people have had multiple accounts--even if just trial ones now and again for friends/family).

I built a PC 5 yrs ago I Dont think I'm going back 2 consoles until the new consoles price go down to 200. The online fees n the constant rehashes of games turned me off last gen. Its just more options on PC than consoles. I love my ps3 n I loved my vita when I had it but I'm not really missing much.

I'll get the new consoles before the next ones come out.

I just built a pc for my kid instead of a ps4 and his eyes glowed. :)

Sure that's not from LED reflections? ;) Custom pcs can light up a room if you want them to.

Did the same thing last year for both my sons. He told me to sell the Xbox (which is collecting dust).

It's a smart move. Why deal with expensive software and games being obsolete every time the hardware upgrades.

That's awesome. I wish more parents were like you.

Not all of them, plenty of crappy pc's around.

Steam does alot of good things for PC gamers... Overall its an almost perfect service...

Kind of glad Origin and GFWL failed, they always seemed like "oh steam is profitable?" cash-grabs

Origin has failed? It was never meant to be a competitor to steam, it was an online store for EA and nothing more. It's the only way to play BF4, and Titanfall is using it, so I'm not sure where you gathered that it was failing. If anything it's succeeding because they are continuing to use it.

Its succeeding because they force people to use it, if BF 4 was available on Steam Origin would collapse.

Origin is too expensive, not sure why they think they can force console game prices on PC users.

There are many reasons PC gaming has flourished. I think one of the main reasons is that it can be tailored to each person's taste. There is no one size fits all.

If I had the money for a better PC I would use it way more than I do now, there are just so many perks. Modding, both for cool content and for fixing broke releases, cheap deals, easy access and so forth. Sure PC doesn't get some of those awesome exclusives on console but that goes both ways. I think the only other thing stopping me is how murky the idea of ownership of a product is with digital. With cheap stuff it's not a big deal but going over $20 I like to know I'll have something until I want to sell it or give it away and that if the service falls on hard times I will still have access even if it shuts down and digital is simply not doing either of these things right now.

steam competes with piracy, and it does a pretty good job. No viruses, cheap prices and convenient. Pirating pc games can be a pain, because you don't get all the patches and sometimes things get a little messed up when the scene misses drm triggers. Most of all personally I like being able to download the games I want without looking around, and knowing they will download at full speed.

PC games go on sale more often and for cheaper. I mostly play PC now for that reason. Plus loads of small indie games.

I could only speculate that the number of PC's that are ALREADY as powerful as, if not more so, than next gen consoles is growing.

I used to sit on the console side of the fence for many (30) years, and I for one will never go back to the hyper restrictive, bloody retardedly expensive and annoying, racist and immature(for the most part) online fanbase world of console gaming.

Neither MS or Sony will ever be able to, or willing to compete with digital distributors prices and sales. A relatively new AAA game on sale on steam could be 5-10 bucks. Same game from MS or Sony? 40-60 bucks. With all the money I save on PC games I can easily afford hardware upgrades and still come out way ahead financially over a console's lifetime of purchases...and have an even beefier rig which far outstrips nextgen consoles.

From arcade to console games etc, the software never becomes obsolete, it just moves over into the vast library of thousands upon thousands of classic games that are always accessible to relive some of those gaming memories, good or bad, its great to have the option.

The smart people have figured these simple concepts out and have moved to PC.

The PC community is just built to be more mature as servers are hosted by small groups of people who want people to join there server so they kick/ban these people. There are some exceptions though such as valve games (excluding l4d for some reason) and MOBAs.

Guilty. The only real reason I play games on my PC is for a few good MMORPGs (Not WOW), and to mod some games. I like to play games with a controller, and I like the feel of a console more. Aside from that the Playstation line gives me access to so many great exclusive RPGs that I love.

It has become my main platform that's for sure bargain city for gamers great mods sorry xbox only getting a few from you this gen.

Agree 2Disagree 0
▼✖-+
SPAMInappropriate
Show all comments (43)
The story is too old to be commented.
40°

The best games coming to Steam & Steam Deck in December

Roller Champions Could Be Headed To Steam, Suggests Datamine