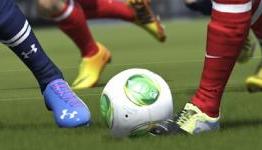 Games Out This Week, Starring FIFA 14

Last week the world seemingly stood still for the release of Grand Theft Auto V, and this week a similar phenomenon will occur within the continent of Europe, thanks to the impending release of FIFA 14. EA’s series is the most popular football game on the planet despite challenges from SEGA’s Football Manager and Konami’s Pro Evolution Soccer and this year, as you’d expect, the series has gotten better.

Here’s our complete list of games heading to PC, PSP, PS3, Xbox 360, Wii U, PS Vita and Nintendo 3DS this week along with detailed price and pre-order info.

Adhttps://www.youtube.com/watch?v=EjfojxXOobE&t=463s
- Comments (0)+ Comments (0)
TopNewestOldest
The story is too old to be commented.
80°3

Linkle and Canon’s Condoning of Rule 63

Prinny, Laharl, And Other Disgaea Heroes Have 3D Cameo In Another Strategy RPG

What was the best FIFA game ever? Have your say