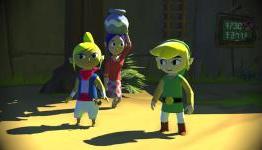 Nintendo Missed a Step With Not Adding Achievements

PlayStation Beat: With the re-release of Wind Waker upon us, what’s the incentive – outside of the game’s HD visuals – for those to go back and play it again? The Wii U doesn’t have an achievement system.

lol "0 friends on wiiu" I dont own one, nor plan on owning one but your comment made me laugh as no one i know has or is thinking of getting a Wiiu which is so weird given they all have had a wii. They all seem hellbent on getting a ps4 and a few an Xbone.

Achievements are for nerds who could never make the football team.

This is their only way of getting trophies.

"Achievements are for nerds who could never make the football team. "

Achievements are for football players who need to compensate for their tiny d/ck.

My list will start to grow once smash and kart come out,i haven't picked up any online games yet.

The author argues throughout the entire article that Nintendo should implement an achievement system, then at the last minute, says it's not important right now and moves on to just bashing the Wii U in general and pushing the reader to buy a PS4 or Xbox One. Quote in point:

"Or if you just wait until November 15 – 22, you can grab a PlayStation 4 and/or Xbox One. Both will have a bigger catalogue of software in three months time, will have actual marketing campaigns, and will at least give you re-assurance that the companies behind the hardware give a shit."

The author is simply using this flimsy achievement argument as a cheap way to push his views that the Wii U is not worth your time at all. Besides, achievements aren't important. No console NEEDS achievements. Are they fun to have? Of course, but anyone who isn't buying a Wii U because it has no achievements or trophies is just not thinking clearly.

Maybe they'll patch it in one day.

It's good for sales, there are people out there who buy games just for trophies and achievements. I wouldn't personally, but I know every trophy hunter out there has the Hannah Montana video game

I don't think it's a big deal though, I'd never not purchase a game I wanted to play because of lack of trophies

Didn't read the article, but agree with the title. Nintendo is so far behind with online it's embarrassing and I'm not just referring to cheevos and trophies. They really need to hire some people to get their online features and user accounts up to the industry standard set by Sony, Microsoft and even Valve.

Don't forget there's an update coming in October to add new features to the Wii U. I hope achievements are included.

October? You mean they pushed it back again? When was this announced?

It has been some time, they sai it would be between the end of september and beggining of october. We can get it at anytime.

I thought about what I said before, achievements are cool, but not necessary, I can stablish my own achievements, some of them are forced and boring, etc, but it's cool to exibit some of your talents in the game. There must be a mid term, because there's an achievement in Assassin's Creed that you have to collect every feather and that kind of thing is boring as hell. Nintendo in it's own way have it's achievements, like trophies in Smash Bros, certain furnitures in Animal Crossing, etc. They just need to be more aparent AND be made for fun purposes :)

I want to have fun with my nintendo games, don't add achievements that tap into my OCD. :[

Achievements are nothing more than a petty psychological trick to coerce gamers into playing games past the point of enjoyment. Nintendo makes a lot of stupid decisions, but this ain't one of 'em.

But it can wrongly satiate that itch in fooling people they did something worthwhile. It's kind of sick really. How about people focus on real goals instead of these fake ones.

But whatever, if people like them fine, but in reality, they're just made up thresholds for events that happen while playing. They don't change how cool you are. They don't change how productive you've been. It doesn't prove you're a better gamer then anyone, or even if you've played more games then them or anything.

It's a fake metric, which doesn't showcase anything you've done except jump through random developer hoops which really means nothing.

Perhaps Nintendo should have them because there are a bunch of people who think this worthless crap means something, but in reality, you're not receiving anything that matters if they did.

Not missing achievements one bit. Don't know why in hell anyone else would. Their useless and pointless.

The Wii U has far more important things to focus on then fricking achievements. It's success or failure has nothing to do with achievements so perhaps Nintendo should focus on making games.

And despite all that, there are people who really like them. Not having them in the system, on a system wide level, was dropping the ball. Sony saw the importance of having one when MS system was so popular.

Whether you care for them or not, achievements are an important bullet point to pass up when it shouldn't be that hard to implement. Tie it all into MiiVerse, and it has the potential to become a hugely robust achievement system that could put the others to shame.

Nintendo went halfway with it by somewhat doing it on the game level with MiiVerse.

I personally like to platinum games I enjoy, as I generally never play games to full completion even if I like them a lot. When playing a game that doesn't give me some metric though, I move on to the next game, probably because I'm borderline OCD, and while it's not that big a deal, it still says something about my game playing habits, thus what kind of gamer I am.

I have plenty of platinums and I like trophy hunting. However, I'd MUCH rather have HD editions add new stuff, give us better textures and models than trophies. And that's what this HD remake does.

I'm the biggest MGS fan anywhere, for instance, and I was disappointed they didn't retouch the textures in MGS2 HD. It was awesome they upped the FPS to 60 in MGS3 and PW.

This is the main reason my Wii U is a dust machine.

I guess instead of playing a game so I can brag to my virtual friends about how much of a nerd I am because I have 100,000 "Gamer" points, I will actually play the game for the pure satisfaction of playing it.

I don't need another reason to be roped into playing a poor game just so I can get the final couple of achievements...

so those most Wii U and 3DS games.

You missed a step with this article. Achievements gives nothing to sane people.

Oh wow how did this get approved? This is a vile blatant attack on a company. The article is incoherent and goes on several tangents. It is unprofessional and the sole purpose put forth an agenda.

The below quote is from the article. How is this related to achievements and the wii u? Yeah rated the site down, this is garbage, n4g deserves better

"It’s also sad to point out that Nintendo is hoping a game released two generations ago will help move their next generation system. Are you that desperate to move systems, or that much out of ideas, that you have to rely on a popular classic to move units?

It’s worth noting that today is the day that Nintendo dropped the price of the Wii U Deluxe unit from $349 to $299. For that same $300 you can grab the Wind Waker HD bundle, that comes with a digital copy of the game. The standard 32GB bundle comes with Nintendo Land, a piece of a shit that isn’t worth your time, even if your a non-Zelda fan."

I support Nintendo, but I agree with this headline. It was a disappointment that they did not add an "accomplishments" system. Why? I have gaming OCD and would have love to try to attain them all. I think it adds more replay value to games as well. A deal breaker to NOT buy a WiiU though? No way.

Achievements are great but I believe IWata stated that it takes away from the enjoyment of a game because people lose focus of why they are playing. I agree, personally I think they should have gone with a share function like the ps4 which says a lot more than trophies or points

And he nailed it with that comment. Nintendo`s legacy must never die or else the video-game industry will be polluted on every aspect.
There`s a game out these days that people with pre-teen minds are rioting to get their hands on, and it`s not even a good game.

A Coveted Wind: How The 'Wind Waker' Gave Ganondorf Depth

Reflect on your adventures in Hyrule - The Legend of Zelda Memories

The Legend Of Zelda: The Wind Waker HD Cheats, Codes & Walkthrough/Guide/FAQ - Wii U
60°