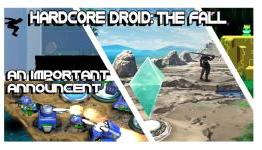 And so it’s Autumn or more appropiately fall, or still even better the fall. That’s the season and the state we at Hardcore Droid find ourselves in this mid-September. No other season’s name has such depressing connotations. Who I wonder decided that a word used to denote dying while embroiled in martial conflict, as in, “he fell in battle” would be a good choice for a season’s name. And then there’s the other sense of the word as in to fall from grace, as Satan does in the Bible. Fall in this sense, as I’m sure you know, means a descent from a high or exalted state to a lower or lowly state. From Hardcore Droid’s perspective all of these connotations fit this 2013 season too well, as they do, in a few respects, dovetail with the message we need to impart to our readers at this time. The flurry of activity that was part and parcel of Hardcore Droid’s summer months has slowed as we, I am sad to say, have lost a couple of important staff members. And like the season and all its dreary baggage there has been a bit of a fall.

Adhttps://store.steampowered.com/app/1488200/Symphony_of_War_The_Nephilim_Saga/?utm_source=n4g&utm_medium=native&utm_campaign=sow_n4g_native&utm_content=png
- Comments (0)+ Comments (0)
TopNewestOldest
The story is too old to be commented.
100°2

What Makes a Great Idle Animation? Devs Share Their Favorites

The Ten Best Point 'n' Click Adventure Games... According To Me - Part One