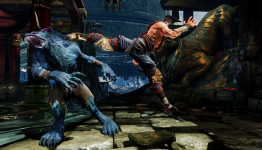 Killer Instinct: Is This The Ideal Way to do Free-to-Play?

PlayStation Beat:Killer Instinct’s pricing has been revealed and it made me think if this is how free-to-play should be done on consoles. Does it favor the F2P or paid crowd?

Its not F2P, apparently.

this is how lots of games should be sold. giving the consumer a scale of what to buy brings way more options to the table. what many f2p games do that consumers don't like is they are pressured to pay to get anywhere. that to me is worse than offering a demo.

The KI should be a "fuller" demo. Have At least two playable characters and a story mode.

if it did would you be more inclined to buy it or are you just making options available that won't have any impact to you either way? on a scale of 1-10 as the game sits now, what are the chances you are going to buy ki with 10 being a definite yes? now i will ask again, if the demo was "fuller" and had a story mode attached and allowed for 2 playable characters how likely would you buy it on a scale of 1-10?

Except I disagree with only one character being available for free. That is the type of F2P I hate. A F2P game must feel rich in content and one character doesn't do that. If you want expand the content you can but by having one character you sort of have to buy something. This is an example of a bad F2P model which I hope other do not adopt (becomes the norm). If they offered a few more characters then I would say it was a good F2P model.

There is a fine line where developers of F2P games offer too much content that no-on buys anything or they offer to little content that it isn't really a "full" game. A few F2P games have managed the balance and when a game does it is fantastic

if they offer more characters with full access to the game then you run the risk of not selling the game. people will just play it for free. which of course m$ should do more of to get gamers to forget about the gold subscription fees. but that's a whole other debate.

I have no plans on buying the system its on, but like DLC, have had to deal with things the company behind the game have implemented.

The problem with this concept, the big problem, is that something with name recognition is being offered for "free" with much of its actual content sliced up into sections which are wholly separate meaning that as many if not more people who wont know better will buy a part or two as get everything, with the company making money off of everything regardless or whether or not its even good. Something like that is too easy and cheap for other companies looking at nothing but profit not to try at least once.

Worse still is that there's already an example of this model in Telltale's Walking Dead game, is pretty much the exact same thing I mentioned as far as name recognition goes, but at least as an RPG it delivers a whole slice of the game to try out. Not just a few ingredients.

sttill on your bubble quest i see.

anyway, this aint f2p. why, main reason it aint play-to-win.

the basic dl is a demo. that is all. calling it anything else is wrong... day one for me though.

@ godmars "The KI should be a "fuller" demo. Have At least two playable characters and a story mode"

typical nonsense from you. they should just give it away i take it? make it fuller and add the complete story like other demos do.... oh wait other demos dont though.

pull your head out of your arse.... or sonys is probably the better choice

"I have no plans on buying the system its on, but like DLC, have had to deal with things the company behind the game have implemented."

so your making an issue that is basically irrelevant. consumers will also decide what they think is of value. it is just one business model m$ is trying to explore. again, it is giving consumers options. just like how i wish more companies would give me the option to only buy the single player portion in many games and not the multiplayer or vice-versa.

why is that model bad? it is like watching a tv series. it is brought to you in chunks. this way consumers can play a chapter for $10 or $15 (when it first came out) and see if they like it. or you could wait until now and buy the whole series for $25 on steam right now. or you can wait for a sale. too many gamers want everything, and they want it now. 30 years ago we didn't even get demo's. now were whining because they only offer us one character that can be played like a full game setting (online, versus, etc) for free and we still complain. even those who won't buy the game regardless of what they offer for free. amazing.

I hate F2P models that constantly incentivise spending. Any game that gives me the impression that I could be more efficient or cool if I got my wallet out is irritating to me, and generally warrants an uninstall.

Well-defined content as offered by KI is acceptable, unless some characters are better and more expensive than others. If I decide I like the game i'll probably buy full character packs to flesh it out.

How is it F2P when you can't even play it without paying for xbl?

Rare never said it was F2P. They said it's "the worlds most generous demo". The internet calls it F2P.

Double Helix are developing this, not Rare.

Honestly at this point they might as well make the subscription mandatory, but I'm sure you can imagine the PR backlash if they put those words out.

I'll be getting/continuing gold anyway, and probably PS plus as well (though Sony may end up a victim of their more lenient paywalls if they shift too much value to the free side of the wall... )

Except it isn't free to play, and even the full game is only launching with 6 characters and no story mode. You could download it for free, but you'll only have access to Jago.

6 characters? What the heck? why can't they just do something properly for once? Everything seems like it has to have a catch.

I imagine when fans asked for a Killer instinct reboot this isn't what they were thinking.

oh, and give it to some decent developers whilst your at it..

Relax dude, the game is coming out in a "season format". First season comes with 6 characters and the second sesaon with another 6 characters for instance.

Either than that, game looks fantastic.

actually first season is 8 characters... 6 on launch day and 2 more a little later on... season 2 will follow that same format...and so on and so forth

Yea this game is not free its more of a rip off.

I think the KI method will be tried by other companies. It is a cheap way to try and get people invested that are intimidated or unsure of spending money on a fighting game.

Dota 2 does it best.

Free to play is an excuse to charge more than what the actual rated price of a full product would have been.

Except in the case of killer instinct, it won't cost you more than the full game would have cost...

but it's up to you if you spend that much money... i played lately Warframe without paying a cent and it was fun and i didn't have a feeling i have to invest in the game anything to enjoy it to the fullest. If people are stupid enough to invest in a game more than 60$ (a normal price of a game), then it's their choice and problem :)

What is a normal price?

Price your life can afford? Price that we accept out of pressure? Or time, being the greatest price and the biggest free advertisement.

Okay so let me get this straight.
6 character available at launch. No single player story modes at launch. Most likely (actually hopefully) those modes will be released when the 2 other characters are ready. Double Helix is still working on the first 8 characters, refining the gameplay, it wont have finishers ready until 2014, and hope to add an additional 8 characters by holiday season 2014.

Even 16 characters, mind you a year from now, is a slim roster for a fighting game. 8 is a joke and at first this game will have only 6. WTF! MS is having Double Helix rush this game out the door just for appearances sake. It's not even close to being a finished product. DH has been working on the title for less than ONE YEAR! If ever a game is screaming "WE NEED MORE TIME" Killer Instinct it it.

It's apparent MS learned nothing from rushing out the 360.

It is $20 bucks people for the first season with 8 characters. Either you like it or don't.

I rather have the game now for that price and compete online and have fun rather than have to wait a year to get a full 16 characters. This model IMO is better than what Capcom is attempting with charging for a full price and come back with 3 more editions for another $30-$40 apiece of the same game.

What Is Going On With Killer Instinct?

10 Franchises That Should Return On Xbox Series X|S