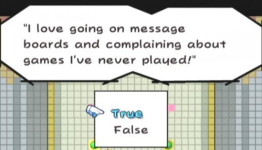 (Editor’s note: There are bound to be spoilers in this Pixelitis Picks. We’ll tell you when they’re coming up, but be careful nonetheless.)

"'You are in a computer game, Max.' Don’t you just love it when game characters become self-aware?

Just like other forms of art, games have their fair share of (often humorous) moments where the characters, story or even mechanics break that barrier that exists between the imaginary plane and our own world. Whether it’s Max Payne acknowledging that he’s being directly manipulated by someone holding a controller or mouse or the jokes made at the expense of internet forum trolls in Super Paper Mario, breaking the fourth wall is a clever mechanic that can not only forge a special connection with the player, but also lets us take a step back from the engagement, chuckle, and remember that it’s only a game.

With the release of Marvel anti-hero Deadpool’s own game yesterday, we got to thinking: what better time than now to look back at all of those illusion-breaking moments that games like to employ?"

The battle with Psycho Mantis in Metal Gear Solid is definitely my favourite fourth-wall-breaking moment. Completely unexpected and probably one of the coolest boss battles in any video game.

Here Are the Superhero Games You Absolutely Need to Play

The Best Suda 51 Games So Far