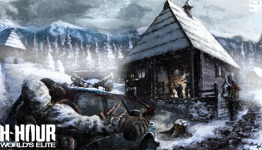 David Sears, the former Creative Director of the early SOCOMs, just launched a new Kickstarter campaign. H-Hour: World's Elite by SOF Studios is hoping to pick up where the first two SOCOMs left off.

Adhttps://store.steampowered.com/app/1488200/Symphony_of_War_The_Nephilim_Saga/?utm_source=n4g&utm_medium=native&utm_campaign=sow_n4g_native&utm_content=png
- Comments (64)+ Comments (64)
TopNewestOldest
Expand all
The story is too old to be commented.

Sears was the man behind socom 2... After he left the series kinda started to suck more and more with each release. This could be interesting.

Totally! Its hard to understand how this hasn't happened yet.

Never played SOCOM 2 or any other SOCOM. Looks like I missed out on a lot of fun.

Socom 2 was the best online shooter. I had the best time of my gaming career staying up till 4 in the morning with a room full of people playing that.

Thats what people dont understand. So called "innovations" hurt this game, like matchfinder. One of the best aspects of the game was not only playing with the same people on your team, but also playing against the same people. It created rivalries all night long.

That's what this is.

Stop wishing and start donating. Only way to make this happen

guess who tweeted this from his account... David Jaffe! :D *waves*

I just backed my first project ever! :D I hope they get funded! PS4 w/Vita remote play please!

I will cradle the balls, stroke the shaft, work the pipe and swallow the gravy.

I love that movie.

Tom Cruise is the man.

Is this for the ps4?

Donating as much as i can!

Socom fans were´s your chance to support something trully for you.

i hope this happen.socom for ps2 was my best online experience.maybe because it was new for gaming but it just has a special part in my gaming heart.

Great find...sounds awesome... Socom2 is my favorite all time shooter...
If s2 vets want a similar experience you can play CS: GO on psn.

You can really see that Socom was highly influenced by counter strike...I'll be playing it today so feel free to pm me and I'll let you add me on psn...

This needs to be in the consoles news as well. They already stated that they would like to port it to consoles if the process is a success....

Will fund this at the end of the week when i get payed.

i dont understand why i laughed at it in respect to you it was the way you said it. ill fund this too.

sony is courting indies, they should finance the project.

The kickstarter goal amount is to make a demo to show to potential publishers/investors to finance it.

I think it may be unlikely that Sony would back it directly but it is not out of the realm of possibility.

Thanks, great info. Definitely funding this project then.

Once the demo is ready to be shown to potential publishers perhaps #SOCOMUNITE should organize a twitter bomb for H-Hour to add even a little bit more evidence of a market?

Hey man. Would you mind starting a new story here based on that Link and tag it for ps3 and ps4 as well as the PC?

Even if you are unable to back it now I ask all of you to please try and spread awareness of this project. The success of this project would not only bring us H-Hour but send a message to publishers that there is still a market for a hardcore tactical shooter out there.

It may even lead to the SOCOM series itself being revived and sent back in the right direction but that is getting a little ahead of ourselves...

Wow.. Ive been waiting for a kickstarter like this to pop up..

Damn..... I'm trying to figure out how much I want to contribute! :D

About damn time. $150 from me, hopefully the goal is reached.

Definitely supporting this. Hopefully it gets on Steam Greenlight too.

This took my kickstarter virginity. Been waiting for a game like this for the last 10 years!

I'm going to back it even tho I'm not a PC gamer. Just in hope that there will be a ps4 version. Even if I still have to pay for the ps4 version, that's how bad I want old socom style gameplay on my console. This will be my first kickstarter game I've backed, best of luck to these guys.

I miss the originals so bad, it's sad what happened to the series(zipper, you took out socom and yourselves, great job!)

Just donated $20. I don't play PC games but hopefully it comes to PS4.

He was behind SOCOM 2, and after he left it was evident that the quality of the series began to deteriorate with each release since... This is everyone's chance to donate and finally get a decent successor to the old great SOCOM.

I bought Operation Flashpoint: Red River used last week and I've been replaying OF: Dragon Rising also. Both remind me of good times with the SOCOM series.

I know it won't happen, but Sony could make a lot of people happy by supporting this and at least saying something about it at E3.

Just so everyone knows, it said I won't be charged until next month, when the pledge ends, if it's successful.

so donate all you want, low risk, high reward!

will be glad to pay on either pc or ps4, don't really care, loved the hell outta socom 2

when he was coming down the latter i was thinking damn that looks good, it looks like BF4. but it was live action :) for me Socom was always cartoony and arcadey but fun. i was a Rogue Spear, Navy Seals and S.W.A.T. player. very difficult though

Kickstarter's awesome - but what would concern me is that with this project, they're only looking for Kickstarter funds to build a prototype for publishers and venture capitalists.

The best thing about Kickstarter is the creative freedom and control it allows dev teams. Would this still be the case if say, Activision were to buy in?

If I was to invest I would want some kind of share, not a copy of the game or some merchandise.

I'm thinking about donating, but I will be a PS4 gamer I'm not a PC gamer..

2, they need to explain what's they goal in term of gameplay and game modes and menus..
I like the idea behind Confrontation ..

if is like confrontation but lag free, bug free 1080p 60fps with nice visual effects, I will donate without thinking about it.. i will donate but they have not explain anything jet..

S2 seem cool but for todays standards IDK it will not work for me, playig one side the hole game without switching seem boring and unfair.. the gameplay seem arcade and to fake and I know is a old ps2 game but if their idea is to go full S2 alike and not confrontation then I don't know if I will like it..

please explain more detail's and I will donate even if i will not be able to play the demo on my pc and I will pay full retail price once the game hits the PS4..

WHY IS H-HOUR SOCOM? This is why:

I'm already actually a backer i went for the PLAYSTATION WARRIOR!
we need games like this ..

Pretty slow start, so far, for a kickstarter...

So-called SOCOM fans better pony up the cash if you want to prove SOCOM, in its original form, wasn't dead when Sony tried to kill it.

Remember, Kickstarter won't charge you unless the project actually meets its funding goal. That said... $200K seems kinda small. 10K SOCOM fans, $20 each. That's all it takes -- now is the time to stand up and make a point, and prove your heart is really in it.

this make me think I may donate but urggg i need more details..
I can't just throw my moeny out there specially sine I don't own a good enough gaming PC but a ps3 and soon a ps4..
I'm a Confrontation fan, not a S2 fan and I love the game set up is so unique and pure skill based teamwork and very social..

Confirmed from the TRS interview with Sears...
http://therealsocom.com/201...

Third and first person views like the original SOCOMs
Round based will be the primary focus
Maps will be designed around one game mode originally
No sprint button
Lean options, no cover system
things like jump-to-climb will be decided upon by the community along with most design decisions
Lobbies
Robust community features for clans & clan wars
Hopes to be multi-platform on PC, PS4, and XBox

Hey you are from the socom forum's
well that sounds good but what about switching factions?
I think it keeps a good balance... without switch and playing in one side tho whole game will make the game somehow unbalanced ..

Plus how will the camera will work? Whats their goal into the visuals?

I was amazed when I saw '' The Division " youtube it if you have not seen it and I said to myself imagine this with socom game modes? Wow ..
If the division is their goal in term of quality with socom set up then I will donate but I may be asking for to much haha

WHY IS H-HOUR SOCOM? This is why:

SOCOM was the type of community where you actually had great conversations with the people on your team. Wins and losses were personal. Kill/death ratio was only a number, and if yours was really good... you were probably a beast. Not just a camper. SOCOM = SKILL