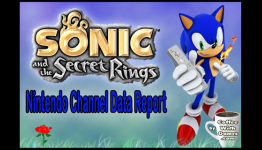 Sonic and the Secret Rings, how much has it been played? Official Nintendo Channel data report

Sonic and the Secret Rings was Sonic's first retail outing on the Wii in the "action platforming" genre, the first of many though. The game was developed by SEGA of America, and released for the Wii on February 20, 2007. It received an ESRB rating of "EVERYONE" with "Cartoon Violence" listed as content for parents and gamers to be aware of.

If you own a Wii, or even a Wii U, you can find Sonic and the Secret Rings for under $20 now if you're interested in the...

I have that game, very good indeed. At least compared to the others in the franchise.

really fun game, and at the time the graphics were really good