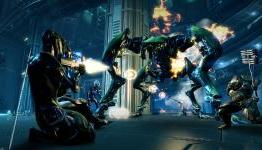 Here are a few screens for Warframe, a free-to-play co-op shooter heading to PS4. The (up to) four player game sees you fighting through a variety of mission types to earn money, XP and to upgrade the warframes – semi-magical armour that grants various abilities and character classes.

free game with trophies and looking good! what do people need more?

For it to be fun. I played the game for about 2 hours and its not really fun.

I have played an though it is free-to-play...it's also a big pay-to-win game also. Though you can probably see most of the game for around 60 bucks worth of IAP but easily spend 200 if you want to see it all.

It's not pay to win. I have it on PC. The money is for customization, new characters etc. it's a co op shooter.

you have no idea what you are talking about, the entire game is playable without even spending a cent & it is far from pay 2 win

Exactly...yes...co-op, customization is more than visual...weapons, suit upgrade = money. Are there things that you cannot get playing for free? yes....can you get a lot of stuff free...yes. But the high level stuff without the purchased suits your kinda dead in the water...its not just visual upgrades or XP boosts.

Obviously I have played the game and enjoyed it but for higher end-game stuff you will be spending money...or 1000's of hours. Slower progress due to f2p is still a pay-to-win model...when people around you are exponentially more powerful due to investing money...is a pay-to-win model. IMO anyways.

AFAIK, Warframe doesn't have a PVP mode, so it's not pay 2 win. You don't get to PVP against overpowered users that spend their money on the latest blueprints and suit upgrades. This game is full co-op. It will make you progress faster, yes, but that doesn't make you win anything. Go play any web broser mmo and you'll see what p2w is.

As much as everyone disagrees with lonesoul65, he's right.

PixlSheX.. "It will make you progress faster, yes, but that doesn't make you win anything."

You pretty much said "it does but it doesn't."

I've got 55 hours on this game (steam) and you will find that unless you're willing to put some money in you're not going to get anywhere fast.

Even if you're a decent player you'll find yourself struggling to keep up with (not beat) those that have invested money, as they use their improved abilities/weapons to progress quickly. It's also easier for them to tailor their warframes to suit the level, what with having more abilities/weapons available.

The term "pay to win" does apply here, just not in the same way as it would in a PVP game.

Did anyone spot the gravity hammer rip-off?

Did someone say free?

I really hope this is an on going trend next gen I mean F2P games.

This game looks like it will be fun with some friends!!

it is, but it can also get repetitive. also, it can be hard to get the drops for the cooler stuff, but its up to u if you want to put the time/money into getting them.

I dont get how this was on PC and they actually held a beta I got invited too and now its a PS4 exclusive!!!? O_o

its a steam game right now, its one of the top 10 played games everyday. Its not exclusive to ps4, i think it might be exclusive as far as consoles go.

I've played a good bit of it and its really fun. the combat is fluid and the visuals are great.

Console exclusive to PS4 because Microsoft turned them down. There's a bunch of F2P games on PS4 now, so even if you don't have the money to start buying new games right away, you'll have these. It's crazy, and I heard Warframe is good too.

Its not a PS4 exclusive because its also on PC.

Noooooo, please lets not start with the whole Console exclusive vs exclusive comments! :)

If I can play a game on more than one platform it's not exclusive no matter what.

If people are going to argue about console vs PC hardware, then they need to be consistent and include software too.

PS4 exclusive 'cause MS don't let indies self-publish and this is indie.

Crazy that indie titles look like AAA titles and MS will be missing out on ALL these games (i.e., Primal Carnage, too).

I wish that they added a sort of team multiplayer mode or that thats on there agenda. I keep getting wrecked in the dual mode in my clan on PC. FREAKING RHINO'S!!!!!

i got to keep a eye out for this. by what you guys are saying sounds like alot of fun is there videos out on this of some game play???

thanks i'll do that right now:)

Soon you'll be hearing:
"Multiple bio-signatures detected. We've got infested incoming."
Over and over again.

But yeah, it's a good game. I think it would lend itself reasonably well to the console. I just don't want them to rush the game out of beta, though until it's ready now that they have a date to work towards. Having just taken part in the marvel heroes launch, I felt like that game should probably have spent longer in development.

I watched a Let's Play video of this - looks like a blast with friends! Might have to check it out on PS4.

That guy with hammer looks familiar,doesn't it?
just an other halo clone .

Uh first of all your a space ninja that runs on walls, default melee weapon, third person. It's already in PC and plays nothing like halo. Such ignorance

You don't have a clue. Plays nothing like Halo. But then, your personal insults prove no one should take you serious, anyway.

wow i just seen some videos on this it really do look like alot of fun. in a way it reminds me of lost planet. but hell that's a good thing because i like lost planet;)

With PS+ and all the F2P games coming to Sony, it's not gonna cost that much to game on PS4!

I was watching some developer demo last week and it looks okay but the trailer reminded me of the original Dark Sector trailer from 2005.

That's because it is dark sector from 2005 :) same devs now making what they originally wanted to.

My crappy laptop cant play this at a steady frame or great resolution. Thank you Sony and Warframe developers for making a ps4 version :D

First thing I will do when booting up my ps4 for the first time is straight online to download all the awesome free to play titles, which I will play later on at night after kill zone , drive club ,etc etc etc etc etc etc etc...etc etc... Lol.

nooo please don't do that. we should all collectively just play the games we buy for the love of god we dont need to crash the PS servers.
Unless you on xbox one cos nobody gonna be on them servers :D

This about sums it up.
http://www.youtube.com/watc...

Wow, another free to play game? That's atleast 3 so far.
I like this trend.

Having F2P games a launch is fucking genius!!! so if you're one of those people who can only afford the console, or only a game or two, and you're worrying about having a long drought afterwards then don't worry, there are free games!!!

Makes a lot of sense, and a lot of this companies are jumping in, can't complain some of this games are good

These F2P game developers are putting EA and Activision to shame.

Sort of the original dark sector concept. Free to play? Where do i sign?

The next chapter of Warframe - The New War - launches onto Xbox, PlayStation, PC and Switch today