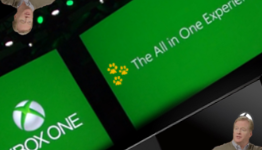 3 Compromises Microsoft Must Make If The Rumors Are True

"In terms of importance, most of the Xbox One features that were announced at the May 21st unveiling paled in comparison to whatever was implied at the event or right after. Really, as far as a ‘grand reveal of a next generation technology” goes, the bullet points were rather underwhelming: there was the TV thingamajig, which didn’t do anything, considering that you still need a cable subscription and a cable box to use it; a bunch of vocal channel switching and other oral stuff, which frankly, I thought Kinect could do already (notice how that hasn’t persuaded me to purchase one); some sinister NFL alliance, between Microsoft and the Goldmember; and some Live improvements that didn’t require new console hardware. And what does Microsoft want in return for it all?"

Adhttps://www.youtube.com/watch?v=R7HhyEZ2HRo
- Comments (2)+ Comments (2)
TopNewestOldest
The story is too old to be commented.

Great read. I particular enjoyed the reference to cloud gaming: MS borrowed this picture from NASA to show what bullsh** looks like from space. lol, classic.

Multiplayer for the Masses: The Legacy of XBOX LIVE

Xbox Live Logo Replaced With a New One On Microsoft Store

Review: Nobody Saves the World - A nice surprise - Gaming Boulevard