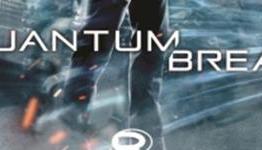 The next game from Remedy Entertainment, Quantum Break, has just revealed its cover for the Xbox One. And a possible release date as well.

*Sigh.. Another "Chin-down, Eyes up" cover. Will developers at least try to come up with better covers

I really liked the placeholder art :/
What happened?

Edit: WTH? The character looks completely retarded and ugly with his head bigger than his body like a bobblehead. I hope the game will be good and won't be how the box art reflects it.

Woah, that looks good. Why'd they change it to generic guy in the cover with a gun thing :L

Am I the only person that doesn't get all hissy about cover art? They should be designed to attract the eye among a bunch of other covers. The only way a cover is bad is if it doesn't do this. I honestly don't care about much else, but I'm probably the minority.

lol, [Alarm goes off in the background] "this just in, we got another problem, they dont like the boxart, nah really, I thought they would love it."

Hmm, simple and intriguing. Perhaps a bit visually underwhelming when you consider what we are all used to, but very effective.

To all the "Why did they change the cover to some guy with a gun?" people:

Apparently it is opposite "early dev"

which tells me MS dont have to much to show and have to pull games that are still far from being finished.

getting bored of that too. i don't think box art will be as relevant on xbox one considering you have to install all your games on the 500GB HDD. on pc box art is non-existent as most games are digital unless you buy limited edition of the game but even then you get a code so you can install it online.

off topic: they released the cover art but have yet to explain what the game even is. a girl touching a woman's ear and then a ship crashing into a bridge explains jack sh!t. really hard to get people excited about this game when you don't show them anything

but if this was a sony game, you would be going mad

There you go, folks.

OMG, when they mentioned Legend of the Guardians I cracked up. Thanks for that!

It's not that bad. I like the cover. Let's hope the game is good. Reminds me a bit of the movie Jumper (a teenager with teleportation abilities).

That was such a bad movie. SUCH A BAD movie.

I was gonna say - it looks like that movie "Push"

THE FIRST SHOTS HAVE BEEN FIRED!!!

And also the green xbone cases clash with every box art except green ones. Disgusting looking all round.

Because you by the game to look at the cover for 6 to 8 hours...

@Stage Just another lost Sony troll bashing EVERYTHING Xbox like always and contributes nothing but crap.

Now we are just nitpicking. That cover actually looks good.
We all have our biases and they are showing.

I could not agree more....in a month that has brought nothing but aggravating news, i couldn't care less if the game shipped with a picture of a turd on it.

Hmm this originally came from Remedy's official website which alot of people seem to be missing.
http://remedygames.com/
Upon going to their website I just realised that even they are disabling comments.

And it's blue and orange.

If you think Margaret`s story is unbelievable,, five weeks ago my sis basically made the small fortune of $5442 sitting there fifteen hours a week from there house and their roomate's step-aunt`s neighbour done this for five months and earned more than $5442 in there spare time at their computer. apply the information here, kep2.com

If Quantum Break was a PS4 exclusive the Cover Art would be totally kick ass though right?

The game will be good regardless of the cover as Remedy know how to make games,

That's what puts Xbox owners apart from the PS3 fanboys.Xbox owners talk about Xbox games and playing their Xbox games.Sony fanboys are more worried about going to Xbox forums and putting down Xbox games.My guess is they have nothing to play i don't know?That's the main reason i got rid of my PS3 to many kiddies.I dont have time for 12 year old crap.Everyone i play games with on the Xbox is in their 20s,30s,and even 40s

hours latter, game gets pushed back!!!
lol...i guess all the rumors about Microsoft being 6 months behind are holding up to be true!!

It's only a cover art. Stop nitpicking every little thing!

That green...ruins the already boring cover

That's one, where's the other 14 exclusives.

Quantum Break
Ryse
FPS from Black Tusk studio
Whatever the hell these two are http://www.eurogamer.net/ar...
Kinect One
Kinect Fitness

well, RARE will need an army of devs to launch all those games in one year.

Hopefully Rare is making a platformer.

Kinect One's just the name of the camera, methinks. That doesn't mean we won't see more Kinect silliness, but I don't think we'll get a game called Kinect One.

Are we sure about Gears? Isn't Epic moving on to some new franchise... no... probably not... probably more Gears retreading.

LOL @ Perfect Dark! Do you think Rare's been endowed with the lion's share of MS staff to reboot four freaking titles? That's to say nothing of their probable involvement in whatever Kinect Sports thing crawls onto the E3 stage.

I know one thing: If there's Viva Pinata, it'll be all Kinect. I don't know how Rare reboots Killer Instinct after NetherRealm knocked Mortal Kombat out of the park, but hey, it'll be interesting if they do.

that's one ugly cover. the green makes it look like a Dora The Explorer dvd you would buy for your kids lol.

This game actually caught my interest at the conference...mostly because it's Remedy, but still. This cover is about as generic as they come. It's like saying "this is shooter #1343". Oh well. If it's a launch title people buying the system will know about it. Hope the game play and story are interesting.

Anybody got the synopsis scoop?

Strange that people would be talking aboutthe cover art and release date when we haven't even seen what the game actually looks like yet...

Yeah, If it was killzone people here might worship its awesomeness and creativity XDD

And so far we don't know much about the game,
it might be cool
it might suck

Well...there's not much else to talk about for QB until E3.

I have a feeling that i would love this game just like alan wake. It's sucks that i won't buy X1 . Too much limitations in it..

People will always have something negative to say about even the minuscule of things.

I don't think people are complaining over the box art so much; instead I'd say they(like me) are just excited to see what the GAME actually looks like not it's box art.Like I said before, it's weird to start talking about release dates and cover art for a game no one but the developers have even seen. Oh well, I'm guessing we'll see a good deal of it at E3.

Gollum your right this board is full of them.

And suddenly we are all art critics.

It's OK, poeple. It's a video game cover, not something to be shown at the international exposition of contemporaray art. You'll most probably walk through corridors and gun down some dudes, you won't be painting the Ginevra de' Benci.

I hate how even the tiniest bits of a video game like the cover art is up to discussion nowadays. If it's good, that's a nice thing, if not, move on. I really don't see anyone not buying a game just because he/she doesn't like the cover.

That being said, it looks generic, and I wouldn't care less about it as long as the ACTUAL game is good enough.

Must be the worst box art in quite some time...

Are you people serious? you just can find any thing positive to say about the xbox one. Who the hell cares what the box art look like as long as the game is good.
I bet sony could reveal a box art cover with a simple rain drop, and you would think it's the best thing since sliced bread.

remedy make great games, I am looking forward to finding out more about this new IP. Box art, good or bad, means next to nothing in the grand scheme of things.

name one quality game that failed due to its box art

Yes it is, but then the sony fans are dumb struck when their are many polls showing more interest in the xbox one; even with all the bad press. Now imagine if Microsoft do come with the games at e3, and how the interest will jump threw the roof.We already know for a fact regardless of what Microsoft shows at E# sony fans are waiting to bash it.

Huge fan of Remedy.
Really hoping for this to come to PC.

Here's to hoping for information on a potential Alan Wake 2 soon after release though.

I'm a fan of gaming in general and although I do prefer Sony, I give credit where credit is due. I see what you're saying though. In all honesty this game caught my attention when they revealed it.

I understand the flaws of the Xbox One from what they have announced, but I don't like to bash everything Microsoft. This game looks promising and I hope Xbox Fans enjoy it. we are all Gamers here and I can only hope the people who purchase Xbox One, get great exclusives as MS has said.

Is that Joaquin Phoenix on the cover?!

This is wonderful, box art before actual game play......hey hey hey eff you bro, I don't care if you respect me.

the drop shadow around the title kills it. Looks like a fan-made box art. In a bad way.

So going by the name, it sounds like a "Quantum Leap" type game, travelling through specific points in time to prevent them from happening, or make sure they happen.

Something disturbing the timeline that you have to stop?
(Shame he has a gun though).

Guy looks a lot like Joaquin Phoenix don't you agree?..

Well I loved Alan Wake when it eventually turned up so am quite excited to see what comes of this game.

Having said that, I think that the reveal was dreadful - the switch from live action to CGI was really jarring to me.

On the subject of the box art, it is a little generic looking but still a nice piece of art that I only wish I had the talent to knock up.

EDIT - having looked again, as others have said - his head is way to big for that body????

Chin-down eyes up dude-bro with a gun? CHECK.

Agree 1Disagree 0
▼✖-+
SPAMInappropriate
Show all comments (70)
The story is too old to be commented.