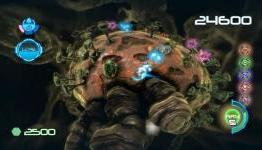 Shin’en on the Practical Use of Adaptive Tessellation, Upcoming Games

'It has been rumored that Shin’en may be working on a sequel to Fast Racing League, and they have stated in the past that they will be using tessellation in their next game. When HDWarriors.com asked about this, and how resource heavy the feature might be, Manfred Linzner gave us a realistic outlook for use of the feature for games in general. He also informed us that Shin'en in fact, has two Wii U games in development.'

Shin'en will become a Wii U star for the eshop and console. Nintendo should buy them.

I love Shinen, they made many good games and all of them are with good gameplay and they are pushing graphics on each console :)

Art of balance, Nano assault series, Jett rocket and others are really good games from them...

yeah, I buy anything with their name on it.