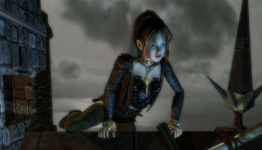 (Editor’s Note: With the game industry being populated with so many RPGs, it’s easy to lose sight of the hidden gems. Enter the RPG Treasure Chest, where we focus on those titles that deserve more attention.)

"The Shadow Hearts series as a whole can be be described as what would happen if the cast of Downton Abbey got drunk with H.P. Lovecraft after marathoning Buffy: The Vampire Slayer. And yes, that is a totally accurate description of this series.

The game is one of the more underrated and under-the-radar PlayStation 2 RPGs out there, having been created by an ex-Squaresoft employee who was tired of seeing the potential of the JRPG fall into a pattern of “safe clichés.”

Taking a unique approach to RPG gameplay and storytelling, Shadow Hearts remains one of the best RPGs that nobody has ever played. It is criminally underrated and one hell of a good time. As I consider it one of my favorite game series, I plan on examining all four titles. Today I focus on the 1999 PS1 RP...

Adhttps://store.steampowered.com/app/1488200/Symphony_of_War_The_Nephilim_Saga/?utm_source=n4g&utm_medium=native&utm_campaign=sow_n4g_native&utm_content=png
- Comments (0)+ Comments (0)
TopNewestOldest
The story is too old to be commented.
80°9

The Importance of Bad Endings

10 Spooky Games to Play for Halloween

Secret of Mana composer has a new 16-bit album that might blow your mind.