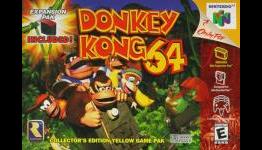 GameXplain:"Donkey Kong 64 is well-known by Nintendo fans for a variety of reasons, not all of which are positive. And one of those reasons is the game's dubious distinction of being the first Nintendo 64 game to require the use of the Expansion Pak, an accessory that increased the system's memory from 4MB to 8MB. Presumably, this was to allow for better graphics and larger environments, or so we were lead to believe by Donkey Kong 64's TV commercial, which claimed the game was "so big, we had to include the expansion pack to fit it all in."

But the real reason for the Expansion Pak's inclusion might actually be a little less glamerous."

Like so many articles on this site, it's prolly just a negative spin. Like anything, I'm sure there's some truth to it, but just not the whole truth.

Uhh, have you even visited that site? They're one of the more positive Nintendo ones there out there. This article wasn't even negative...

Conspiracy! Donkey Kong 64 is the DEVIL. They used the expansion pack to hold souls from escaping!

I'm sure like many articles on here this is COVERING up the TRUTH.

Anyways this was interesting. I never knew this as well, I too am curious how the game would have looked if it actually took advantage of the expansion pack.

I think he means the N4G site. Not the article itself.

Aw man, this was the reason I didn't name my kid "Donkey Kong 64." If only I had known, I could have given him such a better life.

Wow. That's random to find out all these years later. I remember not being able to play 4 player on Gauntlet Legends without an expansion pack. Only 3 player.

Speaking of that game I think we need one for the WiiU right about now...

gauntlet was my game. loved that. then hunter on gamecube. i'd love to have sequels to both of those with online coop on wii u.

So then what about Majora's Mask? Why did it require it?

Didn't this go on with the Sonic 3 & Knuckles expansion thingy

It's time for another shot at a 3D Donkey Kong platformer

As DK64 turns 20, the devs reflect on its design & the infamous DK Rap

Feature: Donkey Kong 64 Devs On Bugs, Boxing And 20 Years Of The DK Rap

Build your own kingdom with Castle Renovator on Xbox