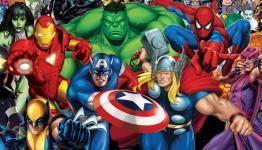 Overall, we guess that our biggest gripe with Marvel Heroes is that it doesn’t feel like a super-hero game. It feels like Diablo, or Torchlight, but instead of a barbarian and a sorceress, you get Spiderman and Black Widow. Add a flawed combat system, as well as some previous-gen graphics, and I’m simply unable to get excited about this upcoming release. Diehard comic fans, on the other hand, will probably have some fun time with it.

Adhttps://store.steampowered.com/app/1488200/Symphony_of_War_The_Nephilim_Saga/?utm_source=n4g&utm_medium=native&utm_campaign=sow_n4g_native&utm_content=png
- Comments (0)+ Comments (0)
TopNewestOldest
The story is too old to be commented.
90°3

Gaming Historia Episode 2: The Rise or Fall of Digital Gaming

When Games Like Marvel Heroes Shut Down, There Are Hardly Any Happy Endings

The Daily Grind: Did Marvel Heroes just get the worst-managed MMORPG sunset of all time?

Gazillion Staff Laid Off The Day Before Thanksgiving

Gazillion Closed, Game Servers Will Go Offline In 2 Days according to report