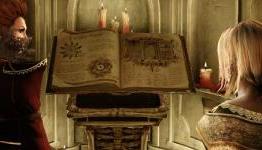 “CryEngine 3 fully supports Wii U and it’s been a great system to work with so far,” Precursor Games CEO Paul Caporicci explained to Nintendo Enthusiast.

“And in regards to Shadow of the Eternals, beautiful visuals are just one part of the experience. There are many different pieces that all come together for this experience and the Wii U handles that complete package very well.

Shadow of the Eternals Wii U nintendo-insider.com
Read Full Story >>

Funny that they are not encountering any of the problems that people like to constantly restate that Wii U as having.

To be fair, different developers handle their work in different ways. Precursor has many of the employees of Silicon Knights and they used to work for Nintendo and used the same kind of structured tech and assets.

This gen has been really weird. EA in particular has been incredibly flip-floppy. Call me a tinfoil hat wearer, but I do believe there is something going on behind the scenes. Why else would third parties (who rely on console manufacturers to exist) bash a console? It just doesn't make sense.

On the other hand, now that we know certain companies like EA and Activision support nearly-always-online and used-game fees, I wonder if these statements were made in order to put pressure on Nintendo to try to make them cave to a used-game fee. After all, all of the third parties seemed to pile the grief onto the Wii-U around the same time.

It's just speculation, but that sort of shady stuff goes on all the time in other industries, and it probably happens in the game industry more than we'd like to admit.

There is a lot going on behind the scenes. EA is trying to put pressure on Nintendo like they did with Microsoft and Sony back in the day so they can get more freedom on that platform. It worked against Microsoft and Sony, but Nintendo is a major 1st party publisher with an amazing amount of strong IPs.

So they really don't need EA support and the games that EA released on the Nintendo platforms tend to be substandard ports and Nintendo consumers know this so they often avoid EA games. This adds up to EA and a lot of other major third party developers not really having any leverage against Nintendo.

It's a really interesting situation, because love or hate EA they are a major third party publisher. Yet when they tried to hard court push Nintendo and say they had no plans to develop games for them, no one really cared. If EA released unique content for Nintendo platforms than it might have matter, but EA doesn't know how to release unique content. They only know how to buy developers that release unique content and then run that developer's image into the ground.

what you say actually makes sense. for one, Sony's stance on used games is already unclear: only saying it's up to the developers. in this case, clearly EA (the way they "support" the Xbone) prefers this used games policy of Xbone.

to add to this conspiracy theory (if one may call it that - pun intended): shortly before Xbone reveal, EA announced they will stop using online passes. perfect timing? i think not, obviously they already know what MS will announce, thus there will be no need for the online passes.

and since Nintendo has not supported this policy, not to mention they're still butthurt for the Origin deal fail, they've decided to punish Nintendo.

I'd have to agree with you, actually glad you bought this up. Damn, I knew the industry was purposely bashing Ninty to get them to crash & burn. Just look at the wealthest 3rd parties & how they've been acting. This needs to stop capitalizing, go back to cool as hell Mid Tier games, like a gen before or 2 current gen. Honestly M$ needs to take a hike, that spot belonged to SEGA. & now Valve is arriving

Yes indeed it does so I'm hoping Monster Hunter Online makes its way to the Wii U, that would be epic! If it doesn't then they can't say it's because the system can't handle it because it can...

Well of course it doesn't work properly if you do a piss poor job interfacing with the WiiU.

You will be waiting forever. Nintendo doesn't make games with that intent. They make good games that look great, but not to blow minds.

Your going to have to wait for a more capable third like Shin'en or second party like Monolith Soft.

-Retro is a Second Party like Monolith Soft.
-And they do focus more on Photorealism than many Nintendo developers.
(the Primes ran on modified Unreal(2?))

The only thing that makes sense about it is that Both Crytek and Retro Studios are fairly close to each other and they may have developed a rivalry or rubbed-off on each other (from interaction and some of the staff interchanges).

I'm not sure if having their own engine would be a great use of cash or how many people would by it seeing as how there are 4 to 5 big ones in the works right now.

Unless, Nintendo is going to let Retro make more that one Game at a time like it "tried" to do before Nintnedo bought them.

Listen Iwata has said we will go through great lengths to show the power of wiiu,he has even said they will take advantage of new technology's to keep up with the competition ie Retro's game engine ???

Yes, I think you are right, and Nintendo also hired a slew of "graphic design experts" to work with Retro and other Nintendo 1st party developers. I am guessing to make the most out of the power the Wii U does have.

No matter what the Wii U will have some amazing looking 1st party games. I still think Galaxy 2 looks great to this day, and look at how little power the Wii had compared to Wii U.

Woah. A developer who is actually working on a dedicated WiiU game that isn't a port, is saying cryengine 3 and saying the WiiU is a great system.

By the N4G standards, this must be a lie. But it isn't.

It's not a dedicated WiiU game, it's also coming to the PC.

I know. I mean it's being built for the WiiU -even if it's not exclusive-, and it's not a lazy port.

10 Kickstarter Horror Adventures That Deserved to Be Funded

5 Dead Games To Save With Powerball Winnings

Quantum Entanglement´s Shadow of the Eternals might happen after all

Dyack Says Shadow of the Eternals Still Alive, Announcements Coming In The Future

Shadow of the Eternals Revived by Silicon Knights’ Denis Dyack