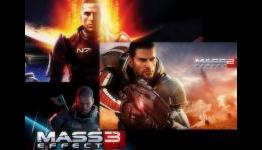 The first time I played through Mass Effect 2 I was nonplussed; it seemed to have less of the rough and experimental charm of the first game, which seemed to be a haphazard evolution of Knights of the Old Republic into an attempt to create the definitive, ne plus ultra, science-fiction RPG which would encompass everything the genre had to offer. It had aliens, and a planet-hopping plot, and exploration of uncharted worlds, and xenophilia if you liked, and upgradeable weapons with dozens of options. The result was uneven, and often clumsy, but it was quite unlike most games in its attempted scope and as a result I defended it quite vehemently as a good game. The second, by contrast, was more elegant and simplistic – all of the aspects of Mass Effect were present but in a form which worked without any inconsistencies or awkwardness – and as a result at first seemed too clinical and perfunctory.

My favorite trilogy in gaming.

First game still reigns supreme over the other 2.