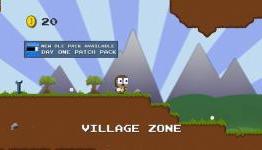 Going Loud Studios makers of zombie accountant and lair of the evildoer, decided to make yet another parody game, and just make fun of everything they can get their hands on, our author hardly thought they even missed a joke about the game industry right now, and they are all really funny, I would list them of but there’s really no point in spoiling what makes this game so great which is its humor, but from limbo to the dark knight rises to mass effect to the elder scrolls to original jokes they just make it all and it makes this game hilarious every second.