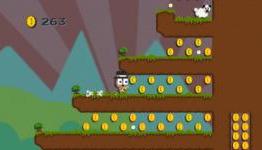 GameZone: " Last month DLC Quest landed on Steam, finally giving PC gaming indie enthusiasts a chance to experience its humorous take on the video game industry. For $3 you get about two hours of unbridled humor and what can only be considered a parody of the state of gaming as we know it. The end result is a satirical piece of storytelling that will likely resonate with indie fans. But even if you enjoy only major releases and don't invest much time into smaller titles, you should really check out DLC Quest. Chances are, anyone who's played video games in the past five years will 'get' it."