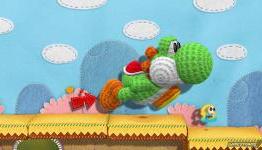 GameDynamo - "Well, with the release of the Wii U, Nintendo is finally giving the loyal dinosaur sidekick, Yoshi, his own exclusive console game after 15 long years (the last release being the superb Yoshi’s Story on the Nintendo 64). Fittingly, the team behind that artistically innovative Kirby game is back to give Mario’s egg-tossing, prehistoric partner the same visual treatment. "

I don't want the Yoshi franchise to look like it's set in a nursery, I'm going to buy this game anyway

The original Yoshi's Island also looked like this... it's just that Yoshi himself was not yarn.

Meh. I'm much more interested in the Yoshi's Island sequel for 3DS.

I honestly love how it looks, and don't see the reason why people are complaining about the art style. IT'S A YOSHI GAME!!! Console Yoshi games always tend to look like they were made in an art room.
Yoshi's Island- drawn by crayon type look.
Yoshi's story- environment looked like they were hand made with cardboard and construction paper
Yarn Yoshi- yoshi is made of yarn

Yeah, the difference here is that the first 2 Yoshi games you mentioned were the first to use those respective art styles for Nintendo. This Yarn Yoshi game, though, is only recycling the exact same art style introduced in Kirby's Epic Yarn.

Is it an awesome art style? Yes, it is. Will it look awesome? Very likely. That doesn't change the fact that it feels like Nintendo was being a bit lazy here and reusing the style from another different IP instead of making a new one exclusively for Yoshi.

In the end, what's most important to me is how it plays. It can look as much as Kirby's Epic Yarn as Nintendo wants, and I'm sure it will look great on HD screens, but I hope it has fast-paced and tight platforming and a decent difficulty... all of that was missing from the Kirby game, making it extremely boring for me.

Personally I would have preferred a more sackboy-esque style (which it kind of has when Yoshi becomes 3D yarn). This is an occasion where I can agree it's a bit disappointing to see a Yoshi game with a style that resembles an earlier Kirby game.

That said, with how so many games use dark grey or brown color palettes, I'd say that this instance is a minor offense at best.

Yarn? Weak. Wait till the next Zelda game for wii u is announced and you're yarn link trying to rescue dust ball Zelda from the evil Ganon vacuum cleaner

@ deafdani How is it being lazy every game out there uses the same art style.

@ XXXL you so damn clever.

I love Yoshi, The running animation when he isn't full yarn is so perfect, The levels look beautiful, reminds me of lbp sorta. My only worry is yarn kirby was mega easy.

Here’s What A Yoshi Wii U GamePad Could Look Like