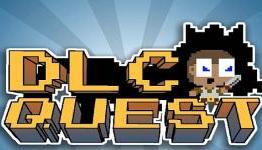 The videogame industry has changed greatly in recent years. In just selling digital generation has evolved greatly, the former major expansions almost no longer exist and appeared DLCs have become almost mandatory in general and left many players upset. Although some DLCs are really great expansions with hours of content at a fair price, there are many DLCs bits that seem removed from the game and that should be part of the original package.

Who does not remember those DLCs released on launch day or who comes included with the game disc itself but need a charge? DLC Quest is a satire before a game. A satire of the current state of the industry and one of the funniest games I've played in recent times. Make no mistake, I am not saying that is a great game, which is not bad, but it's his humor that makes it so special.

Even though the game itself works up quite worse than working your mood save the day. There are going to play really know what will happen next, will play to read the next joke. Picking up on the idea that games today require a new DLC for virtually everything in the beginning of the game start without music, with no character animation and you can only move to the right. To buy everything they need to collect the coins that are scattered around the map.