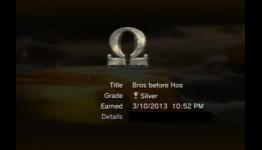 Junkie Monkeys: With all the silly controversy surrounding God of War: Ascension lately, we decided to list five trophies that could be considered just as bad as the "Bros before Hos" trophy.

Before anyone gets up in arms at the title, and misses the hint in the description: it's satire.

Yup, though I'm surprised how Bayonetta got left out.

A thousands deaths to TEH HATES!!!

I like the guy but for what he complained about is just plain stupid. A trophy didn't bring down your enjoyment Adam did it? People use to p,ay games without achievements or trophies so these are extra bells and whistles but people will complain just about anything

It's messed up because he took the whole thing the wrong way and now Sony Santa Monica has to deal with it. I think they should keep the trophy as is and say screw the negative press.

It's ok though, since none of the enemies are wearing any rings, so they couldn't have left any widows behind.

Madam Sissler should get his own trophy: Credibility Annihilator

Wow the trophy for Pain

It was quite painful to get...
http://exophase.com/game/pa...

But I bared through the pain.

"But I bared through the pain."

Are bad puns worthy of n4g's hall of shame? :P

Don't let me go through the pain of losing a bubble for asking that. :(

That Pain trophy is the funniest one. Look at the icon for the trophy lol.

Hey I'm Adum Sesslurr and Bros Before Hoes trophy is offensive. Pain's trophy tho, it's fine with me. ;)

Lol Harder Dick's Balls with a implied picture and no one bats an eye.......I actually have that trophy

I have it too! Man, that trophy was kinda difficult but so worth it!

Scumbag Kratos is a scumbag:

lol @ Michael Vick in the corner

EXACTLY, hate how the dumb people reacted to the trophy, Anyways i for one think that theres not enough sexism in the first place.

I have the "Harder dicks balls" trophy.

It was freaking difficult to get.

I love trophies! I got the that obedience trophy, kicking demon dogs never felt so rewarding.

more proof that the industry bows to the pressure of the few idiots who just happen to have a large(ish) audience.

The media follows a feminist agenda and it has leaked into gameing.
Take 15 minutes of 8 o clock soaps in, and you'll see women abusing men left and right, in plain sight.
If ONE of these issues would be turned around, and a MAN would Slap/Jab/Make fun of/Imbarise/Abuse a Women, it will somehow turn up in the news.

away with these dirty scumbag feminists, and white knights who have been brainwshed into suporting it.

I think they are neat and show creativity and they are the developers right to add them and title them whatever. Shut up and enjoy them and don't cry like an Islamic person who herd something against their god.

Here we go.. Now nx gen will have ppl complaining about the types of trophies in games.. SMH wtf is wrong with ppl? Its just a game! why complain about the stupidest things like what the trophy is called & or how u get it?

Adam Sessler wouldn't have cared if it was Karato's with a couple of guys & the trophy was called bros & more bros.

Lmao I was hoping to see Harder Dick's Balls on the list!! I am a proud owner of that fairly difficult trophy =P

Metal Gear Solid 2 HD has a trophy called ' Snake Beater' which involves getting caught by Otacon stimulating yourself to a girly pic in a locker. What's funny is this was programmed into the game some 12 years ago before trophies even existed, lol! Peeps are too pretentious nowadays. Even if there's no problem, they'll make one.

I think there should be a level where Kratos fights an inverted Kratos. So the guy is covered in black ashes instead of white ashes. After he kills he guy, the trophy "Whites Only", can be earned.

Now some people might get up in arms and say it's racist, but those are probably the same idiots that thing the "Bros before hoes" trophy is sexist....

And yes, I am being VERY sarcastic. I love GOW. I own every copy on my PS3, but seriously, that trophy is ridiculous. We gamers should not be defined by children on Live using the n-word, or unnaturally large breasted women in almost every game with a female character. It's bad enough that almost every game has a white male lead that looks like a space marine, and that FPS's are being blamed for random shootings.

If we, as gamers, can't look at our industry and see the subconscious sexism, then we're eventually doomed to fail. BTW, Sony, next time you have a conference, why not have at least one, just ONE woman, or minority or someone that isn't a space marine looking white male. Then maybe the other groups will feel accepted, and our gaming culture can expand.

They should have renamed the trophy - "Allegiance To Male Comrades Before Women Who Sell Their Bodies For Money". Rephrased to avoid offending the hoes.