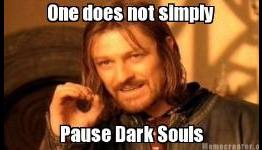 What the Crap?: Unpausable Games

"Dark Souls is highly regarded in the hardcore gaming circuit, but I think most people just really hate the series for its high level of frustration. ... If you want to take a break from the game, feel free to hit the pause button. But be warned, while you see a familiar stats screen as in many games, the action isn’t really paused. You can be tinkering with the stats screen and get ambushed by some skeleton warriors. Combine this with other annoying features such as being invaded by other online players (but not having voice chat), a complete lack of a story, and the inability to manually save a game and keep backups, and the unpleasantness is more overbearing than the difficulty setting." - Mark Freedman

Dark Souls is technically an online game, so even playing offline just pausing the game won't stop the action.

Personally I never had a problem with this since I always paused the game if I needed to step away, in a safe location.

But I can understand the frustration some people have towards the game since it is very unforgiving.

Star Discord is a StarCraft lookalike optimised for mobile by a one-man team, out now

Dark Souls Gets a New Board Game

How Wronged Us is Inspired by Dark Souls, Resident Evil, and Silent Hill

Here are all the Golden Joystick Awards 2021 winners