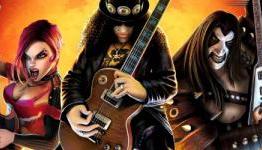 Stick a Fork in it: Plastic Instrument Fad is (and has been) Done

Hardcore Gamer: After five years of releasing rock-based rhythm games and several releasing content for them, they're finally coming to an end. Once heralded as one of the five must-buy game genres of the generation, they winded up being nothing more than a fad.

Adhttps://www.youtube.com/watch?v=IJUbGKExS0A
- Comments (13)+ Comments (13)
TopNewestOldest
Expand all
The story is too old to be commented.

Still, had some of the best times playing these games with friends.

some pretty hardcore guitar hero and rock band players out there. I know that sounds strange but hey, i can remember when DDR was THE thing and there would be competitions at arcades with actual prizes.

As far as the plastic instruments goes...I must admit that i do have a gene simmons battle axe shaped guitar for my PS3 that also works on the PS2. It is supported in both guitar hero and rock band. It felt better to play with than the stock ones you get with the games.

I can also recall in an interview with Slash that he said real guitar heroes play real guitars. This was before he was featured in GHIII I believe. But thanks to these kinds of games, my son has picked up a real guitar and has done quite well for himself.

So these games can influence real talent in people.

"But thanks to these kinds of games, my son has picked up a real guitar and has done quite well for himself."

I'd also like to add that it not only gives someone the urge to play a real instrument but, it exposes them to all these types of bands that otherwise some wouldn't even know they existed.

I'd like to see a return, but unfortunately activision killed it off for anybody who tried to be innovative with the formula ala harmonics.

They over-saturated a niche game, and it wouldn't have been so bad, but there were multiple knock offs that came around and even two games in the same series in the same year. I think people just kind of got sick of it.

I do think we'll see it, or something like it again one day.

One day? Didn't Rocksmith only just release not long ago?
I do agree with your main point though, it's the same reason some gamers are a bit fed up with COD and generic military FPS, (those who didn't just jump on the hate bandwagon at least) it isn't that the games are bad, it's just there are too many.

They'll be back in a few years.

3 Guitar Hero games in one year killed the GH franchise.

Activision should come out with their own brand of milk since they are quite familiar with it.

I loved guitar hero for about 6 months it was a lot of fun but it just got old. Now my 4 year old son uses the guitar as a toy but has never played the game :)

I agree, lots of good times, over now though.

It's a sad day not only for gaming, but for rock and metal music too. These games were responsible for keeping rock alive by bring it to a younger generation. Now rock really is dead.

Rocksmith is alive and kicking and actually teaches people how to play. Its the evolution of the genre.

I love Rocksmith, but it's not for everybody. It's more of an instructional tool than a game. If you want to learn guitar you can't find a better teacher than Rocksmith, pretty amazing.

Why the Guitar Hero and Rock Band Series Failed

Five Games Greater Than the Sum of Their Parts