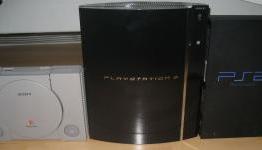 Telegraph looks back at Sony's foray into the gaming market.

this should be their advertising line I say

Argh 2 more days! So excited. Everyone at the office thinks I'm such a nerd for counting down the days -_-

little do they know...

Do not underestimate the power of PLAYSTATION!

Haha that's what I said to them!!

my reaction when its announced by Lord Kaz Hirai.

What's all the fuss all about? Who EVER said PS4 was to be shown-off? Lost all fun in PS3 all of s sudden?

1st. Sony with their videos on PlaySation history and what might come Obviously (Hint its PS4)

2.I know a programmer for the PS4 ....who told me it was happening.

you jut don't rent a big venue invite investors and media and live stream it globally to talk sales and show a power point presentation.

sony has never hyped up this press conference before and never to this extent. if they hype up this press conference then not announce the ps4 that would do more harm then good to sony. there is literally no other option now that all this fuss has been created. they never live streamed this event before the fact that they are livestreaming it proves that they want everyone to know. sony not announcing ps4 on 2/20 will be damaging to them at this stage

I'll give Sony credit the hype train for this reveal is huge! I havn't ever seen this much hype for an announcement in the gaming world ever. Even E3 doesnt get this kind of hype.. Everybodys talking about it and will be watching it even 360 fanboys.

Sonys failed at advertising in the past but this time they really hit it. If the announcement is amazing with amazing games announced they could win the next war early by riding this hype train all the way.

these videos every day of their past consoles are just building the hype even more. You can taste the anticipation (it tastes kinda like pineapples I think, then again I'm eating a pineapple) on the internet. Nextbox better have more than improved Kinect to show off or PS4 announcement will totally steal its thunder. You know Sony will have the exclusives and the power won't be that different.

Theres a reason why theres so much hype for the PS4 among core gamers. Sony was the only one this generation who stuck with the core all the way through. Microsoft in the beginning concentrated on the core but after studying the sucess of Nintendos casual console they decided to go all out with Kinect. Fast forward to now and it appears that Microsoft will be going casual again and Nintendo in the beginning made it seem that they were concentrating on the core but in reality they are trying to replicate the success of the Wii by focusing on the casuals with a gimmicky controller. At this moment it appears that the only ones who will focus on the core Next gen will be Sony which is why there is so much hype for the PS4.

But a word of warning, Sony could do a 360 and focus on the casuals for the PS4. I doubt that it will happen but its definitely a possibility to think about.

but you have to think about something. Back during the PS1 and even PS2 days there was a slew of casual content being delivered later in those platforms cycles. Reason is the core had already purchased those units earlier on.

some 5 years into each is when there was a significant increase in casual titles to try and entice those who didnt get one earlier. MS and the 360 is no different. The parent company does not have to be solely responsible for 'core' content. The number of 3rd party releases on all platforms is evident of that.

edit: MS didnt give up on the core as much as the core would like to think. This industry is bigger than you or I or casual or core or...

The natural progression of building a bigger industry is diversity. That may be hard for some to accept but for those who have been enjoying this industry since the beginning, we understand how it works and know that the intention for the future is something for everyone.

We are all casual at times and core at others and we are all on the same team when it comes to enjoying what this industry has to offer.

FYI: He never kept his promise.