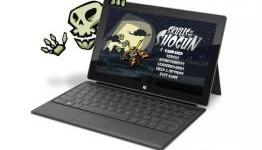 90% sure this is a duplicate story.

ill get a surface for sure cant wait portable gaming is meant like this.

smart phones and tablets are not any good for serious gaming so how is using one as a controller for your console going to make it good for console gaming, and dont say its a wii u rip off or an attempt for wii u style gaming the wii u controller is a controller with touch screen. phones and tabs are just touch screen and anybody that owns one (exc xepria play) will know there only any good for quick casual games. bad time to be an xbox 360 owner unless your one of the few lunatics that get down with kinect and think this is the next best thing. hardcore 360 fans enjoy trying to play smart glass kinect enabled games. forza, halo, gear of war and fable with new crappy controls yay

The troll and hating is strong in this one.

If only you would have read the article. Its saying how you can use the usb to plug a 360 controller in to play games on Surface.

That means you probably could plug a controller to your Surface then have it connect to your 360 for a possible WiiU like experience.

Why does someone disagree with my pure stated fact?

Or you might be a possible troll or have no imagination on the amount of things you could do with this.
Hicken forgot that option, but he seems to give it to everyone else....strange?

I'm a dev too and this is very exciting.

Microsoft kills AltspaceVR and with it a piece of VR history