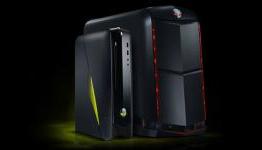 Alienware: “PC Gaming Is The Future”

Alienware has long stood as the leading name in third party gaming PCs, and we had the opportunity to catch up with the company at E3 2012 and discuss the state of PC gaming.

Contrary to what so many would have us believe, Alienware’s Joe Olmsted thinks that not only is PC gaming not dying, but that it’s healthier than ever — and that consoles are the dying breed.

Of course it is!

PC gaming
The past, present and future of gaming.

I have a gaming PC... But there are not allot of PC games that interest me. I spend allot of time on Japanese games, which are not really for the PC.

I understand the PC is powerful, and has some fun games. But I prefer consoles due to the Japanese support, Resonance of Fate, Gravity Rush, Tenchu (Z), Monster Hunter and others... Those are all games I adore, and are some of my favorite games ever made. But they are never put on the PC, though it would be awesome if Tenchu Z did get on the PC!

Well depends where your interest is. PC does provide all the multiplats which are available on console too, however with a better experience.

Having said that, PC does offer simular generes that you would find on console. However consoles dont provide the generes the PC has to offer. Consoles have no reply to games like:

Dota,
MMOs (while consoles do offer them they are a showdow of the PC version).
Simulators (Arma 2, flight simulators etc)
RTS (PC is the king of RTS),

Most genres done by console are dont by PC, however the veriety found on PC isnt found on console. I personally been playing tons of Dota since the last few months, Its a mod to a 10year old game(this is why i love PC gaming, they took a 10 year old game and gave it new life). Recently i bought a pass into Dota 2 Beta. Dota 2 is probably one of the most anticipated PC games this year, yet its going to be free.

Great games came to life as mods from the PC, you have an examples of:

Team Fortress 2, Portal 2, Dota You dont see such innovation on console because they are locked down platforms and the console makers dont promote such stuff because they dont see any profit out of it.

I have Portal 2 and Civ V for the PC, love them both.

And while allot of western multiplats are for PC, most Japanese games are not. it is true that MMO's, Sim's, and RTS's are best on PC, though it lacks allot of JRPG's, Action games (DMC3SE was a horrible port and no Ninja Gaiden) and no fighting games like Blazblue past the first one.

And innovation is still in consoles, but it is overshadowed by the overflow of shooters. Resonance of Fate, Gravity Rush, Demon's and Dark Souls. To say you don't see innovation in one field is a blind assumption.

It really is all down to preference, and I would LOVE to see some of the games I play come to PC, but I have to follow my tastes, and Dark Souls is already having issues on the PC, so I will just stick to the PS3 version since I already have over 200 hours into it.

Where was the Pc in 1985? The nintendo was rockin at that time. Console were here first and the audience and support is leagues above. Though it's astonishing how far the pc has come.

Its funny you mention 1985, yet forget none of todays consoles truely offer BC. Its again the PC which today enables games from all eras to be played on one machine.

I could be playing games from 1990's arcade on my PC with a DS3 controller wirelessly. The list includes all of Nintendo consoles to date, PS1, PS2, all Sega consoles. Basically anything not PS3, XBox 360 is playable on PC. The amount of BC is simply mind blowing.

Hell i wonder with all the thousands of usd worth of games people bought on consoles this gen, they probably wont be playable on the next consoles. On console its never possible to truly build a gaming library. The day a next gen is out, you have to maintain your old box or lose out on all your old games (and dont tell me its easy to maintain old consoles, not many people are going to have a Snes, ps1 laying around atm, nither will you find those in the market).

As a PC gamer, i have literally thousands of games in my library. My Steam list alone has over 200 games. Luckily those are going away when another gen starts.

Yes that's true but like everyone that talks about emulation on the PC you fail to mention some of them just aren't very good.
The PS2 emulation sucks especially.
Tried to play FFX with it and the game just slows right down, also tried to play Silent Hill 2 and 4 using the emulation and you have glitches all over the place.

Btw the PS3 may not have PS2 compatibility in the slim models but you still have full compatibility with PSone games.
Also isn't the wii and xbox 360 backwards compatible?

Also when you say your console library will be made redundant next gen isn't it the same as spending loads of cash upgrading your PC to play the latest games? still costing you money isn't it?

Anyway I always hear how the PC is the future and consoles hold it back yet I never see anything that's so far beyond consoles to give evidence of that.

Steam is amazing though, especially the prices its unbelievable how much money you save compared to the console versions when they perform better on PC (most of the time).

Emulation can never be perfect, however its amazing how good it is. With a modern rig, 95% games out there run perfectly. Hence i wouldnt be whining over the few that dont.

Wii is only compatible with Gamecube games, it doesnt support N64, Snes or Nes games. Yes you can buy some of the games again from Nintendo(whatever they have decided to release), however good luck making those run on the next console. Same can be said for Xbox 360.

PC only needs upgrades every 4-5 years it lasts just as much as a console gen. If anyone built a Dual core PC with 8800GTX back when PS3 launched, they would still be playing most games in 1080p, which the PS3 or Xbox 360 fail to do.

By the time the next consoles are out, they will be costing as much as 500usd. For the same price or a couple of hundered USD more you can make a amazing PC that plays all your old library. Which certainly isnt possible on console.

Go ahead try playing a game like Crysis from 2007, consoles still dont have a game that out does a game from 5 years back. You could try playing games like Shogun 2, Witcher 2, BF3, Metro 2033. Running maxed out those games looks amazing.

Even standard games on console, which are considered ordinary are a different experience on PC. Go ahead play something like need for speed shift in 3D on 3 screens (eyefinity), on decent hardware the game will still be running at 60fps. The effects are simply mind boggling.

Yes Steam is amazing, i have over 200 games on my list there, and it feels great that i will lose none of them when the next gen rolls out.

It always comes back to Crisis doesn't it lol
I have all of the games you mentioned and I have them on maxed settings and yes they look amazing but not so much so that I would stick with my PC over getting a console.
Eye candy only goes so far and the PC just isn't doing anything interesting when it comes to new games.In fact I would say there hasn't been a must have PC exclusive since Half Life 2.
Where are the ground-breaking games?
sure they look nice but what are they actually doing that's new and exclusive?
There is no Uncharted,Journey,ICO,Shadows of the colossus,Flower,Heavy Rain or anything else that blows me away on the PC.
Dear Esther was good but lasted less than an hour.
Just my opinion though I'm sure you disagree lol

A company that sells PCs would say this.

Alienware: “PC Gaming Is The Future”

It may be, but all my gaming interests/franchises are on ps3 and 360

It could be , if they weren't soo damn expensive

Its actually cheaper than consoles if you want it to be.

You dont need to go out buy a highest end 2000usd rig.

A 500usd rig will run circles around consoles, while its games will cost cheaper. In the long run PC is always cheaper than consoles.

You could still get a console for cheaper and be quite satisfied with the results. Pc imo is just missing that killer app. Hopefully the devs will stop complaining about console and just make the best game the can on the pc.

Maybe, but it's not for me.

pc just offers you lot more, consoles prevail with those many exclusives. developers dont bother anymore since they know many will pirate the game

Yeah and Iam going to be sleeping with jennifer Aniston tonight, consoles will always be more appealing to the masses than PCs it's just a fact.

PC gaming will always be around. Consoles are basically PCs built with a specific purpose in mind. However, I don't think Alienware will be around forever with their outrageous prices. Only fools would spend so much on a PC when they can easily build one for a third of the cost or less

PC gaming will never go away. Whether they be facebook games to Diablo 3. They will be always be around.

Both pc's and consoles are the future in my opinion, at least for the next few years to come.

I think next gen one of the big things will be digital distribution which may help the cause for computers but consoles are already beginning to accommodate for that with xbox games on demand and similar efforts on psn. I wouldn't be surprised if next gen saw all games being released for digital download on the next consoles just like were seeing on the psp vita.

The other big thing I reckon will take hold more is services like onlive. I personally live in an area of poor broadband speeds (like 2.5mbps) but later this year its being upgraded to 30mbps and thats in a small town, so those services will become more viable.

if services like Onlive become integrated into smart tv's it would be an incredible change, especially for the casual markets as it'll make the process of buying and playing games streamlined to the point where it becomes instant and fluid and easy for anyone to access.

Theres room for all these markets in the time being, in 5-7 years or so though, who knows where things will have moved to.

15 Best Gaming Laptops For Gaming On The Move