Everything I write here is my opinion. Don't take it seriously - without my pity . . . in advance. 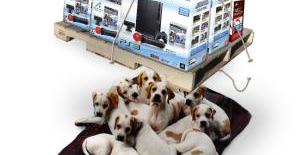 Actual facts reported today:
Sony's latest entertainment gadget, the PlayStation Move controller, is at the top of every child's Christmas wish list but the remote sold out across the country nearly three weeks ago. However some retailers have still been selling them online.
"It's potentially a breach of the Fair Trading Act if you're marketing products you don't have to sell," said Consumer NZ chief executive...

So it's so popular, it's out of stock -- BUT:
How can we filter these facts into a Sony negative, fanatically?

Tragedy struck families throughout formerly peaceful New Zealand during this holiday season as children everywhere where personally betrayed and disheartened by Sony.

For three weeks now Sony has provided their new end-all-be-all-not-a-Wii-reall y-we-mean-it 'The Move' controller tantalizingly online clearly displayed on all websites for children 14 and under, refusing to actually let them buy 'The Move' even with the stolen credit cards of their parents!

Sony Spokesman Alan Compton said "Well, that's what you get for living in New Zealand" and promoted their new product you also could never actually buy there: http://www.theonion.com/vid...

Worse still are undercover video's surfacing on MoveTube that although known to Sony that pallet's of 'The Move' controllers weight over 60 pounds but are not labeled in Kilo's, Sony failed to inform the public that each pallet, if dropped would horribly crush any puppies under them. Nobody in NZ knows what 60 pounds weighs, so pallet's are routinely stored precariously hanging by threads over the many Puppy Playgrounds coincidentally found at every loading dock.

Already contacted minutes ago, Sony refused to add a simple, poster-sized photographic label showing puppies gruesomely crushed under the weight of motion gaming goodness saying only : "We don't care if other consoles have a higher Puppies to Pallet's 'attach' rate . . . F#*& Em!"

For this reason retailers have refused to stock 'The Move' after urgings from PeTA about the horrifying death that await's any wayward puppy that happens to be under the loading dock area during a cable or forklift failure of lifting any negligently-deadly pallet of 'The Move' controllers.

Families rushed retail-outlets throughout the continent demanding safer handling of 'The Move' and that their children's puppies be protected from the evils of all that is Sony.

Converging on our cities and nation with Laser-Guided Forklifts with Pallet's of 'The Move' wrapped in strapped on puppies...we in New Zealand wait for the holiday season to be over, and our civilization to be rebuilt again...

...Except this time we'll just cut to the chase and call it "Australiette"

lol that was great; it's almost like reading Kotaku, except the spelling is correct.

Repair and restore in ReactorX 2 on Xbox