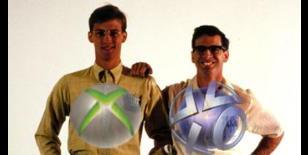 The unification of the Microsoft/Sony fanboy....

Desperate times call for desperate measures, and I consider this desperate!!!

Its that time of season again. Adrenaline is active. News spin is.... spinning. Hate is strong. Love is lost. People are taking a hard stance with their console of choice, and with the open, ANONYMOUS, forum that is the internet, it is especially showing with this new generation.

Good news is spun negatively. Negative news is blown out of proportion. Negative rumors are taken as gospel. Fanboys are creating blogs just so they can get on N4G and preach. Its a sad state of affairs, but not as sad as what I had to endure today.

Some of you may know my stance on the issue. For those who dont, I like both consoles. I even like the Wii-u (I just wish they named it something else). I even understand that we, as human beings, are gonna have our differences. Although at times some of you can take it to the extreme..........that is another blog altogether.

I have brought all of you here to try to meet on common ground. Find a common fight to fight. An enemy of my enemy is my friend, so to speak. I may have just found that enemy.....

I usually have no quarrel or issue with these types. I don't own anything Apple, by choice, but I do fix ipads and iphones at my shop. Well today I met with a gentlemen who just couldn't hold his Apple glee in whatsoever. (I will now begin to write verbatim what he said about his iphone 5s during his monologue)

***** You know the 5s is the first x64 phone. All other phones before it had x30 processors (WTF?). Plus it's the first phone with a true fingerprint scanner (lie), see (he begins to show me). Blah, Blah, Blah....... the camera is the best on a phone by far (I glance over at my lumia 920 not saying a word). Look at this picture I took in pitch black night (he shows me a pic of some female that he took at night, I just smile and glance over at my lumia 920 again). You need to get one (no I dont). Plus Ios 7 has to be the best mobile O.S. ever invented (with features that Android has had forever). How do they come up with this stuff. Its like the people at Apple are aliens from the future (What?)****

Now I know some of you may be thinking, hey, I have an Iphone. Who does he think he's talking to? Not you of course. There are many people on these forums who have a ps3 that are not a Sony fanboy. Many people who have an Xbox 360 that are not a Microsoft fanboy. They can see things for what they are. This person I met today, is delusional.

This is the reason these gaming companies are turning console gaming into a form of mobile (cell phone) gaming. This is why we get all the DLC. This is why their are microtransactions in games that should not have them, at all. This is why corporations are getting richer and richer. The uneducated consumer who reads off things like a press briefing.

Now I can't knock him on the X64 comment because as far as I know, it's true, but everything else was just crazy. I could go on and on, with facts, disproving everything but it would have been a waste of time. I wished him a good day and sent him on his way with his Ipad just in amazement because, I had heard stories but had never seen one in person. A real life Apple Fanboy. I wanted to take a picture and post it on one of those conspiracy theory websites for proof.

So can we all just take a minute and pause for the cause. Lets come together hold hands and sing Kumbaya, atleast for the fragment of time it took you to read this blabbing blog.

I wish you all the best come November 15th and 22nd. May your own personal Christmas days bring you great joy.

Adhttps://store.steampowered.com/app/1488200/Symphony_of_War_The_Nephilim_Saga/?utm_source=n4g&utm_medium=native&utm_campaign=sow_n4g_native&utm_content=png
- Comments (12)+ Comments (12)
TopNewestOldest
Expand all
The story is too old to be commented.
3408d ago

People get called "fanboy" for simply having more interest in one product over another, the word is losing its meaning. Fanboys are those obnoxious, blatantly mystified people that either troll arguments that involve the competition or blindly ignore all negatives associated with their choice interest.

We aren't all fanboys, we just get called "fanboys" and real fanboys would never put their issues aside an unify. They are blindingly devoted, there is no getting along with the competition.

yeah but apple kids are fanboys because they basically think anything without an apple on it is inferior and they take shit out their ass its not their prefernce they try to enforce their lies.

You forgot to include a section on how pcs own consoles.

Also could have written a little bit about a typical day in the life of a console peasant.

You really are just a delusional fanboy yourself, aren't you?

I never hide it, when it comes to console I prefer my ps3 over my 360 ( still prefer my pc over anything else).
Has nothing to do with me being a Fanboy or hating my 360 i wish people would calm about this stuff.

its preference, Ps3 gave me a lot to enjoy vs 360 in the past 5 years. I had a gold account a while back and did not understand why i had to pay and simply stopped paying and enjoyed the same content free on the other console. I enjoyed my Blu-ray, I enjoyed exclusive on all side , Pc , Ps3 and 360. Love Halo and Forza , I use exclusively my 360 controller on my PC.

See i like something about each side for these piece of hardware that gives me plenty of entertainment.

Tell me about it. Its usually the fanboys themselves calling other people fanboys.
I prefer my ps3 and vita too. I have a gaming PC as well as a 3DS and did own a 360. But i honestly prefer sony. I plan to buy the xbox one and ps4 day one, yet can still be claimed as a fanboy.

On the internet, you are either a fanboy, racist, sexist or whatever, seems like you cant be just normal

I am getting PS4 day one. I also have a Vita.
Right now i have no reason to want the Xbo except for Forza. I want forza really really bad but can't do it. Not for $500+ no way.

Sounds like you should just wait for Gran Turismo, or test Driveclub out

eggnog93 - I will , I am a bit of a gear head. I like racesim on PC and occasionally GT5 and right now F1 2013 CE is holding my interest until drive club then Gt6 comes out.

What does Apple have to do with the console wars?