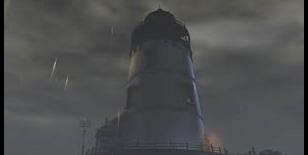 At the start of the first Bioshock game you crash land in the Atlantic, not properly knowing who you are or why you've crashed. You know you're not quite a 'faceless protagonist' though - you see family photos, you're a smoker. You are meant to be a fixed 'somebody' not just 'anybody'.

Similarly, in Bioshock Infinite, you are somebody. you can even see your own reflection early on.

In both cases, you are invited to enter a lighthouse. Why?

That's not strictly true. In Bioshock 1 you crash land near to a lighthouse. There's fire and metal around you and it's gloomy and dark.

If you stay in the Atlantic or sit on the steps of the lighthouse, put your controller down and leave, nothing happens. That is both the content of your story and the ending of your story when you finally switch your machine off if you don't wish it to overheat.

But this is different isn't it.

Unless you had no curiousity at all as to what Bioshock was, unless the front cover gave you no clue to the fact that this might be a 'harrowing experience', then you knew that going in the lighthouse would be a BIG MISTAKE. It wasn't likely to easily end up with you gleefully diving in a big pool of coins Scrooge McDuck-like.

This particular version of the Atlantic carries no noticeable sharks nor risk of hypothermia as far as my swimming around in it for a while suggested.

It is early on apparent that this lighthouse is not, like most lighthouses, actually anywhere near land. But even sitting in the steps outside of the lighthouse - or, ok- in the foyer- to wait for daylight and look out for whichever vessels tend to notice the lighthouse...

What would be wrong with doing that?

But Irrational (apt name considering this circumstance) makes it wrong don't they? You didn't pay £40 to sit in the foyer of a lighthouse waiting for a dawn that probably never even comes.
You have to push on to get your money's worth- to see the HORROR. To get your ticket on the ghost train. Because that's what it is and what Ken Levine has admitted. It is a haunted house attraction. That you WILLINGLY enter, that you WILLINGLY press on knowing the kinds of horrors to come.

That makes you a fool.

And from the very first time that the Irishman's voice came in to my ears I though 'Oh no..' It's in this game to make people think 'He's friendly isn't he? Aw bless him. Maybe there'll be a nice point of Guinness and a pot of gold waiting at the end of this psychopathic rainbow' and I saw through it right away.

Basically, no matter what you do now you are a fool. Not just as a character but, worse, your real self. You either lose out on £39 of experience or you risk dying horribly. You earn no brownie points for forseeing disaster.

You may say that many games do this but the circumstances here are different. 'Should you choose to accept this mission', you're going along with the instructions from a mere voice. But if you're clever enough not to do it, you're stupid enough not to experience the game. You can't win.

Bioshock Infinite makes this thing that nagged at me so much at the start of the original game the very crux of the entire Infinite game.

Another lighthouse 'there's always a lighthouse'. Light and lighthouse are usually a symbol of safety, 'the right way' without question. There's also the implied religious metaphor of light as truth in Infinite. The games are not anti-religious and certainly not anti 'do the right thing' (for OTHER people) but they show how messages can be used for any end.

Both games show that they can be the exact opposite. Help is not always help. Light is not always 'good' truth. (The games are not 'Beyond Good and Evil'- they still operate on moral linear lines like the museum ghost trains they are).

The Lucretia Twins at least give you a reason to spur on in to the lighthouse in Infinite. They make out what a terrible place it would be to be left at if there was nothing for you to do.
Right from the start Irrational are having a laugh at your lack of choice and the 'choices' throughout the entire game keep on having this in-joke at you. Infinite is as scripted as any theme park ride - it revels in it. Even the skylines, which once looked so free in early trailers, are rendered as mere combat tools in the final game. This game doesn't want you to make your own story. It wants to tell you a story.

It all seems so peculiar. The original Bioshock was made out to be about choices. But all that comes down to is which way you kill a baddy and whether you end the game a complete saint or a complete monster.

Basically, Bioshock is 'Alice in Blunderland'. Curiousity killed the cat. It's only your own curiousity which means you ever had to enter the lighthouse. You follow the white rabbit of an Irish voice. Your physical form is altered. You're surrounded by countless 'mad' hatters (kind of, allow me this strain at a metaphor)- the splicers. There's even a scene later on in the game which looks like the Mad Hatters Tea Party. I know this is a easy to use metaphor - the nature of the Alice tale lends itself to many videogames.

But it's still like each Bioshock game is a nightmare that you can only escape from by scaring yourself to death until you wake up from it. Like any dream or nightmare, you can never know in 1 run through whether your 'choices' have any meaning or whether they are your consciousness always being lead to one outcome- or whether there is any good reason why you are experiencing any of it in the first place.

Adhttps://www.youtube.com/watch?v=_iUAHlmkvuE&feature=youtu.be
- Comments (13)+ Comments (13)
TopNewestOldest
The story is too old to be commented.

What in God's name is a mug? I take it you didn't mean the object used for holding beverages.

Changed 'mug', which might generally be more of a British term, to 'fool'.

The "why did you choose to listen to the commands?" thing felt flat in such a linear game. Atlus didn't have me fooled for a very considerable amount of time; especially once he advised me to suck out a little girls soul when the cure was literally IN MY HANDS.

The point of the game is exactly to put $60 down for a funhouse ride. That through the persona of a character, regardless whether said character has any say in the matter, that "you" willingly went on that ride. That "you" are not a fool but a customer looking to be entertained.

Granted it would have been nice if Irrational spent the extra coin and offered a "seasonable" option of waiting for rescue instead of going into a madhouse. But again, you the player knew exactly what the character is in for when you bought the ticket.

In most games you're not invited to be a mere customer to a thrill seek. You're given a proper quest that you can wholeheartedly believe will have tangible and worthwhile benefits for your character that will make the hell worthwhile. But, yes, many rightly enjoyed the ride. Even Infinite has its very spooky moments later on in the game.

But we did sorta know...

The 50 quid argument explains itself, we buy a game to experience the content

Story wise I somewhat agree, in reality we'd probably wait than explore some strange devices. But also, it's not like you would expect this lighthouse to be dangerous. It is just a lighthouse after all. Maybe we'd go in looking for help, as we'd just survived a plain crash. And it only turned out dangerous because the City fell apart. Regardless though, the player goes into the lighthouse because thats where the fun is. That's what we payed the money for, not for a happy ending for our avatar.

I mean, there was obviously something 'off' from the very beginning, due to the fact that your in the water before the plane. And you should be dead. However even so there's no way point not going into it.

Lol, it would be really fun and crazy if you could wait several hours before entering lighthouse and greet the morning sun and in several days some kind of rescue ship

Someone thinks too much. While I believe making intelligent observations is a good thing, and I know this is satire, but I look for reasons to enjoy games. I can't stand it when people poke holes in everything. There could be 10 pros to 1 con but someone will always focus on the con.

So when I want to get lost in world someone created, I look at the whole thing. For instance to look at masterful work of art I look at it and don't try to find the brush stroke that went that millimetre too far and blended the next color. I just enjoy the damn painting.

I agree Lukejrl. But the reason that I make an exception for Bioshock is that it prided itself so much on 'choice' and yet gives you no choice in being a puppy lead around on a leash. Then calls you out for it in the 'twist' (I never actually got that far in the game). It's a cheap way of making the 'player' in to a mere 'audience' who Irrational wanted to ridicule it seems. And Infinite keeps on having that laugh at the audience in a way. It's like playing 'Puppeteer' in disguise in a way, the over the top jeers of the programmers in every action that you do that it really means nothing.

I see your point better in the manner you described, but still all the choices given in games had to be thought up by the developer. In skyrim you have tons of choices but most of the outcomes are pre determined either by obviousness: ie you kill this guy this quest can't be finished or you saved him and did the right thing. There are only soo many permutations that can be sorted out to a satisfying conclusion. BioShock advertised the choice but remember too that they developed the game just around the time choices were beginning to be important.

Hollow Sounds: How The Music of Hollow Knight Tells Its Story

Review: MoM: Lockpicking is a clever look at part of games history - Entertainium