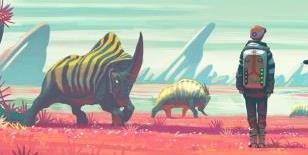 The hate train is real. And, it's fueled by no man's sky. Part 2

MY TAKE ON THE HATE TRAIN

I know there are a lot of gamers out there that feel mislead when it comes to no man's sky. I get that, I do. But in this case I feel like a majority of hate is coming from gamers who are riding the hate train because this game didn't meet THEIR expectations, and that maybe those expectations were based not solely on fact, but instead on conjecture provided by their own imaginations, or their friends imaginations.

Also, and I hate to admit it about any of the cultures that I consider myself a part of, but, I think a lot of this is certain people not wanting to look uncool.

I feel the following thought was had by some of the individual detractors of the game at some point. "I don't want to tell my friends how much I like this game that they all hate".

As far as the media outlets go, it's really no surprise that the majority of reviews of this game are either average or extremely low because one, the audience that these sites are reporting to are not interested in reading an article about no man's sky being a pretty damned enjoyable game. And, two, websites survive on clicks. Which article do you think is gonna get more views: "no man's sky is a pretty enjoyable game with a lot to see", or "no man's sky is a steaming pile and everyone involved should get sued!"? The latter of the two will always get more clicks.

I have heard people complaining about the price of this game. Saying things like: "it's an indie.", and "I shouldn't have to pay the same price for this as I would for a triple a title." and to that I ask this: How much did you pay for Destiny? I paid 25 bucks for the vanilla copy on eBay fairly quickly after being released because so many people felt mislead by bungie at the time. And rightfully so. Destiny's original story was chopped up and glued back together so much that nearly everything that made it sound enjoyable from its announcement was completely changed when it actually released. But I digress. I also paid 25 bucks for the season pass and then 50 more dollars for the taken king and at that point it finally resembled the game it had promised to be. The story is still super thin with almost all of the mythos being explained through the grimore cards. And game play is still extremely tedious and grindy. But guess what...I still enjoyed it. Now bungie is releasing the rise of iron to bring yet more content to this wayning world. And they are gonna charge $30 more. So, if I buy rise of iron, it will bring my total cost to play the finished version of Destiny to $130. That is a whole lot of money. Even for a triple a release.

I know it might seem silly to complain about bungie's practices regarding Destiny, to some. Maybe even as silly as complaining about a lack of ringed planets in No Man's Sky, to others.

I am not here to defend either company, and I definitely don't want to start a debate over which game company has financially soaked it's audience more. I do want to point out the hypocrisy in vilifying one company for lying to its audience about multi-player and planet rotation and everything else hello games is being accused of, while giving the other company a pass by continuing to buy their DLC.

Also, I know there are readers out there that will say that Destiny was complained about a lot when it was released, and, even more so, after the initial shine had worn off the game. And, to that I say, "I agree with you reader who I will never see in real life.", and I would reply with "I never saw any posts about a class action law suit, or personally attacking the head of bungie."

Furthermore, one thing that you do get with No Man's Sky is a constantly evolving galaxy sized ecosystem that has and will release updates throughout the life of the game to add features and content to the universe at no additional cost.

That is assuming the game lives long enough to really start stretching it's legs.

The prospect of this game having longevity is pretty exciting. Especially considering they are planning on adding things like base building, and multi-player. Also, has anyone wondered what the Stargate like portals are, and what they're for? I know I have. And I think they may actually be a link to a shared space. And that maybe that is why no one has been able to actually use one yet. Maybe Sean Murray and hello games planned on getting us all together from the beginning and they just ran out of time and couldn't delay the game any longer. After the flood and the extra time that took, as well as the delay from July to August, maybe they had to release it with some stuff missing. But THEY DID NOT LIE TO US about the features covered in this blog, including the biggest gripe that most people seem to have, the multi-player.

Show me where Sean, Hello Games, or Sony ever stated that there would be multi-player in the game in any way similar to any other FPS.

This game was designed to be something no one has ever done before. Giving players the ability to traverse a galaxy sized galaxy searching for an answer to who they are. And in a way isn't that what we all do every day? Amidst all of the monotonous tasks we have to complete we find who we are. And maybe that's what No Man's Sky is. Maybe it's supposed to make you introspect. Maybe it's not designed to be binge played by the majority of users. Maybe one needs to find the balance between how much time to spend on each planet farming for resources and trying to upgrade their exo-suit, and when to move on. Maybe we should just do what we need to do to make it to the next star, while only spending a little time on each planet if any at all.

Maybe we should look at this game like we look at life.

I'm not going to spend any more time at work than I have to in order to make the money i need to take care of my family. Well, in No Man's Sky, work is mining. School is learning the alien languages. Your hobby is finding new technologies and cataloging animals. Your ship is your car. It takes you to and from work and home. Home is a space station, an anomaly, your ship, and the galactic center. Wherever you are headed when you aren't mining, cataloging, going to school, or searching for technologies or ships. You are a nomad, and the center of the galaxy is the end of your journey. Or maybe the beginning.

No Man's Sky is what it is.

I, and all of the people still playing No Man's Sky are thoroughly enjoying it.

And, Mr. Murray, if you're listening, please continue to develop your idea. Don't let the hate train derail your opus. And if you're open to suggestions on what to add to the game, please consider ship building. That would be super sweet. I would love to build my own ship from the parts programmed into the algorithm. I am not alone.

And to every body still spreading false accusations and perpetuating the unfounded negative sentiment towards No Man's Sky and it's creators...

Go out and create something.

Make the game YOU think No Man's Sky should be.

I would definitely check it out.

- Comments (0)+ Comments (0)
TopNewestOldest
The story is too old to be commented.
30°Fresh

New Runes and Keystones announced for Wild Rift in patch 3.2