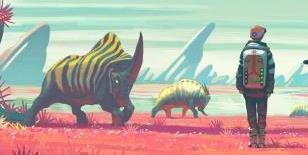 The hate train is real. And, it's fueled by no man's sky. Part 1

Look. I still haven't maxed out my exo-suit or my ship inventory. And, my multi-tool only has 8 slots. I've only been to a handful of star systems, and my hyper drive is still the first one bestowed upon me. I have spent hours scouring various planets and moons for resources to help me on my journey and further my growing bank of units. I haven't concluded the Atlas quest line nor have I come anywhere near even scratching the edge of the galactic center.

I don't know everything about this game. What I do know is that it is very divisive. And every day I see at least one, usually multiple, articles decrying Sean Murray personally as well as Hello Games and Sony for not delivering the game to us that was promised back in its embryonic state. Even before the big e3 reveal, and well before the countless interviews, articles, and tweets that made me, and so many others, so excited about the prospect of playing this game. This is not a review of the game. I do not think this game deserves a review in the traditional sense.

I can say I have definitely enjoyed the time I have spent with it. And, contrary to popular opinion, I believe No Man's Sky IS the game we were promised. But, I am not militant in my support of this game or it's developers original vision or intentions. I am also completely sympathetic to the people who feel mislead, disappointed, and lied to. I have felt like that before and I feel for those people, deep DEEP down, in my feels. It sucks. But this isn't therapy either.

I'm writing this, my first blog ever, about the difference between being mislead, and allowing our own expectations to become unattainable, thusly leading us to feel mislead. I am going to examine what Sean, Hello Games, and Sony actually stated about the game prior to release. And, together, we are going to find the truth.

We were told that No Man's Sky would have a multi-player game play component.

I have found no evidence in which Sean Murray said there would be a multi-player component that would have any meaningful impact to game play.

Sean Murray founder and creator of No Man's Sky, had this to say to IGN back in May of 2016, “If you want a first-person shooter-sci-fi-around-on-a-pla net game, play Destiny. It's a really good game. Go play that. We're not trying to do that.”

Murray added, “What we want is for the player to play with a sense of that other people have been there before. So what will reasonably happen is going to a planet and discovering that someone else has been there before you. You will see traces of them, like creatures they've named and things they left behind.”

I also personally recall an interview in which Sean said you might occupy a planet that someone was on at the same time, even in the same area, but you wouldn't be able to see them. All you would see is how they effected their environment.

I could not prove this either way.

I have scoured the interwebs to try and find some article to either verify or dispute that this was said. Alas, I have not been able to find anything showing me that either Sean or hello games stated this in so many words. So I can not refute this statement.

I can however say that, logically, a completely water-filled planet would, most likely, not have been something the algorithm would have been programmed with as the player would not be able to land on the planet. Now maybe there could be a planet that was all water except for one island. Maybe that would be cool, but I'm guessing it wouldn't as it would make travelling on that world even more tedious and slower than what is already being complained about.

As far as an all desert planet, I doubt that would be programmed either. At least not to the extent that would be acceptable to the masses. Considering that most people would want the land to behave like actual sand and shift and move as the player, and also environment (wind), interacts with it. It would look awful with the style of No Man's Sky, and end up as a flat texture that would resemble light sand colored dirt. Not like journey, or even to a lesser extent, uncharted 3.

As far as ringed planets go, I feel that it's purely aesthetic. Would it be cool to see those in game? Yes. Does it in any way effect the way the game plays? No. I feel like the ringed planets thing is only being complained about to try and add more fuel to the fire. To what end? I don't know.

I personally live pixel style graphics. I don't expect every developer to agree with my aesthetic tastes.

Also, in my searches, I did find a Q&A session on IGN back in May of this year. In this session Sean was asked a question about how deep the oceans could be, and his responses were very theoretical. He said oceans "could be" pretty deep. And also that "most likely" there would be large animals and great danger going that deep so it would probably be best to not go there.

I have not personally run across any "giant" fauna in the game. But, as I said, I have not been playing it religiously like some other users have. I have however seen the videos on the Internet showing these behemoth creatures. And I, myself, have actually logged a few different species of dino-like creatures. Have I seen the apatosaurus like creature that was featured in the trailer? No. But that doesn't mean it doesn't exist.

I do however feel that this is actually 2 statements.

Truth (from a certain point of view)

I watched some old e3 interviews with Sean from the big reveal to get to the bottom of this one.

In those interview videos Sean refers to "factions" as groups that are different from each other, and based on your relationship with that "faction" you may be helped or hindered by them.

If you listen to the context of the interviews you can logically conclude that Sean is actually just referring to the different alien races in the game, not "factions" in the sense that most gamers are accustomed to. I don't think there was any ill intent here. And I do think intent is what should be considered when accusing someone of lying.

As far as waring factions in the game, I haven't seen any large scale battles. However I have seen smaller scale battles involving freighters and fighters. Also a very good friend of mines was attacked by 21 hostile crafts when trying to defend a freighter. I personally would call 21 hostiles a pretty large battle. The largest battle I have been in was with 6 hostiles and that was pretty intense.

I think the difficulty scales with your level. And by level I mean how far you've upgraded your ship and suit and multi-tool. Because my friend Nate has completely upgraded everything and his battles are way crazier.

I think factions and faction wars are in the game, but, maybe not exactly what some people had expected.

NPCs are not confined to structures and ships

I have not been able to find anywhere where Sean stated this.

I have not seen any NPCs outside of buildings, stations, or ships. But I also have not seen 100% of the game, and never will, sadly. Everyone was crying foul when it had been a whole week with no one spotting any giant animals, but, you can certainly see the videos on YouTube now.

Also, here in the real world, we earthlings thought the coelacanth was extinct until some random fisherman pulled one out of the ocean.

We discover new things all the time here in real life. And in No Man's Sky we are dealing with planet sized planets and moons sized moons. How long do you think it would take a single person to find another single person on earth? Months? Years? A lifetime?

In short, just because we haven't found something in No Man's Sky yet, doesn't mean it isn't just waiting to be found.

All discoveries are catalogued in No Man's Sky's servers "forever"

I am only including this in my blog to further show that sometimes consumers jump to conclusions without giving ample time to come to a rational decision.

It was reported on reddit, a few weeks ago, by a user, that all of his/her discoveries were systematically being erased in order from oldest to newest. THIS HAS ALREADY BEEN DEBUNKED.

This has already been disproven and yet I still see posts on this as though it is fact. I have also read a handful of articles reporting this issue and calling for the heads of hello games, but I only saw ONE retraction after this was shown to be false.

These are the only "lies" I am tackling in my blog. For a complete list of the major "lies" circulating the Internet consult your local computer machine or smart phone device.

Is No Man's Sky perfect? No. Did Sean Murray, Hello Games, and Sony lie to us about what we were getting? Based on my research, the answer is no. Feel free to PM me any links to videos or articles that prove otherwise. I will update this blog with any retraction based on any new information.

But this is my opinion.

I think that so many people out there bought this game because of there misguided belief that there would be a multi-player element to it, that when it didn't have one, someone wanted blood. So, now, anything that someone feels is lacking from the game is added to the list of "lies".

And check out part 2 of "The hate train is real. And it's fueled by no man's sky".

Adhttps://www.releases.com/?utm_source=n4g&utm_medium=native&utm_campaign=c1
- Comments (0)+ Comments (0)
TopNewestOldest
The story is too old to be commented.
30°Fresh