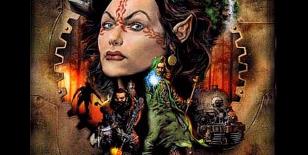 I'm not sure how many of the younger crowd will remember this game, but in 2001, a little company by the name of Troika games released one of the most innovative and immersive games that had been developed at that time.

Arcanum: Of Steamworks And Magick Obscura was one of the most in-depth games ever released in the 'steampunk' genre. A fantasy RPG based on the concept that magic and technology could be utilized together in a massive world was something of a novelty at the time, when most RPG's were focused either on the ole' sword and sorcery cliche', or the starship and laser rifle space adventure.

The game was non-linear, a new trend that, at that time, was just developing in the video gaming world. Once you got past the opening scenes, you were essentially on your own to do as you pleased. With a variety of races, a mixture of backstories, and a wide field of choices of how to shape your character into a wielder of mighty spells, or a craftsman of deadly devices, Arcanum filled a niche that had been sorely overlooked for many years.

The graphics at the time were on a par with other popular RPG's at the time, such as Baldur's Gate and Fallout. Three combat modes were included in the final release of the game: real-time, turn-based, and a faster version of turn-based, which could end up being very frantic, and regrettably, sometimes very clunky. Nonetheless, the game played quite smoothly for the most part, and the depth of the story and that of the character creation made up for it's shortcomings in other areas.

The world itself was vast, with many areas to explore, and the incredible amount of detail invested into the NPC's that one would encounter along the way was very impressive. The crafting system was fairly unique, in that you could take trash (literally!) and make it into powerful items and equipment. The magic system was something of a novelty at the time, with several schools to choose from.

All in all, it has always made me wonder that, after Troika dissolved in 2005, no other company has sought to acquire the rights to such a beautiful and imaginative title. I like to think that there are enough fans floating around to make an announcement of a sequel a big deal.

Rumors have come and gone over the years, but with other, larger budget 'AAA' titles getting all the attention these days, I guess it just stands to reason that not many developers or publishers would want to take a chance on a game that was, at best, a fringe title on the outskirts of the RPG genre.

That's really sad. Because this game was truly an overlooked masterpiece.

I totally agree. I would be totally into a new arcanum game or even a re release of the original with some touch ups. Though that being said I would really be into any non standard rpg at this point, there's still mostly just high fantasy with a serious of lack of steam, or cyber punk.

It's a game that has Tim Cain involved in it.

There's not much more that needs to be said.

Besides the point you made earlier where after the introduction of the game you are on your own I completely agree with; where when I met up with Virgil and he was talking about your fated destiny I loved how I could pretty much just tell him to F' off and go about my business as it was and be left to explore this world without worrying why the hell this Zeppelin crashed and why this old man gave me a ring to give to someone.

It was really good at giving you the illusion of choice!

It's really sad that Trokia dissolved I just got through playing Vampire: The Masquerade - Bloodlines their last game they made (also the first game to use Valve's Source Engine) where in one playthrough I clocked in at over 30 hours (and bear in mind this was for a game that was rushed to the market).

Aw yeah, I loved this game back in the day. This, Nox, and Planescape: Torment are three of the most underrated RPG's ever, I think.

It would be awesome to see an sequel come out in the near future. The climate is perfect for it right now. If properties like Wasteland and Shadowrun can be resurrected, then why not Arcanum?