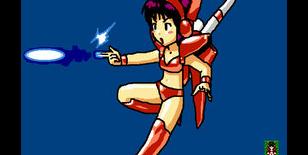 This is, without a doubt the one game that needs to be remade for current or next generation.

Allow me to explain.
For those of you that are over the age of 30, you may remember an 'under the radar' title that was beyond awesome. A game that combined the adventure/exploration of The Legend of Zelda with the twitch space shooter gameplay of Zanac to form one of the best gaming experiences I've ever had the pleasure of playing.

That game is The Guardian Legend.

If you've never played this game, you have no idea what you're missing. The story was simple; you have to stop a space station full of alien lifeforms from colliding with Earth, and the only way to do this is to engage the self destruct sequence of the station. Of course, the keys to do this are scattered throughout several levels of play. Several difficult, painful, throw-your-controller-at-the-s creen levels of play.

It was so damn awesome.

I've seen several remakes in the past decade or so that made me stop and wonder "How the hell did that merit a remake?". Games like Return to Castle Wolfenstein, Splatterhouse, and Warhawk (Warhawk, really?!). Let's finally do one right, do one that would be of benefit to the gamer. I think it's honestly a no-brainer.

Look, we all like good games, right? It's why websites like this exist. The original developer for TGL was Compile. Well, they're not around anymore, and I'm not really sure who owns the rights to this fabulous game, but it's high time that we, the gamers, spoke out. Let the movement begin! Post, troll, flame, and whine!

Create us a new Guardian Legend!

Wolfenstein has an important FPS heritage, even though the remakes don't do it justice.

Well I can't say I ever played the original so I can't comment on it's quality but I'm VERY glad they did a remake. Warhawk on PS3 kept me playing online for a looooong time; brilliant game and it's successor, Starhawk, is still a party favourite when friends are round.

If people like the game as much as you do, there is a possibility of it returning again. I didn't expect Duck Tales to return at all and yet now it just so happened to come out of nowhere. A new generation of gamers will get a chance to enjoy old school game, with a nice HD shine put on it.

Repair and restore in ReactorX 2 on Xbox