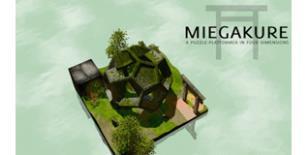 CAT: Miegakure is a game of the fourth dimension - you better explain that! How did you arrive at the game concept? How exactly does that *work*?

As far as we know the universe is 3D, though. So our solution is to display only three dimensions at a time, and the player can swap which three by pressing a button. What does it mean to only see three dimensions out of four? We can get a feel for it by thinking about what it would be like to only see two dimensions out of the usual three. Basically we could only see inside a flat 2D plane, like taking a 2D slice of a 3D world. For example if you could only see a 2D plane and a 3D sphere crossed the plane, you would see a circle that grows until the sphere is halfway into the plane, at which point the circle would start to shrink, until it is completely gone.
Like in this picture from the 1884 novella called Flatland: http://1.bp.blogspot.com/_X...

So basically you are taking cross-sections of the sphere, like slicing an apple into a thin slices. It turns out you can do the same thing, in one higher dimension, where you take 3D cross-sections of 4D objects. This is what the game does.

CAT: I remember when I first played feeling like there was a disconnect between what Miegakure *is* and how I played the game. Can you talk about the relationship between explaining the 4th dimension and playing in it?

MARC: Yeah that's a very important point, and I think the game's greatest accomplishment is that it finds a way to set up the 4D world so that it maps to concepts we are familiar with.

But that's still a bit hard to explain with words, and I don't want to have a heavy-handed tutorial... but we humans are really good at learning logical systems by just playing with them.

An example I use often is that of a toy ball. By playing with a toy ball as a kid you intuitively learn about how gravity works. You can adjust the throwing angle and force and see the different paths the ball takes. You learn about parabolas without even knowing the word for them. This is very different from knowing the second-order differential equations of motion under the force of gravity. Clearly you don't need to understand a lot of Math to know how to throw a ball.

In the same way, Miegakure doesn't explain anything explicitly about the fourth dimension, it just lets you be inside of a 4D world. If someone wants to learn the mathematical theory, however, it can be built upon stronger instincts.

CAT: What is level design like, in the fourth dimension?

MARC: The idea of building things out of 3D worlds helps a lot. Designing the levels first and foremost involves placing 4D tiles (Minecraft has 3D tiles, and this games has 4D tiles).

Since there are no tricks or hacks in our engine, we are building what a 4D world would be like, in many ways. This creates a space were puzzles happen naturally: they are just simple consequences of 4D space.  More traditional puzzle games very carefully set up situations, and the behaviour is limited to what the designer has intended (for example you need to input the right code to open the door, and the code is written down somewhere hidden). Because what we are building is so general, I might not know all the solutions to a particular puzzle... or I might discover a lot of puzzles by just setting up random situations and playing and seeing what happens. If something surprising and interesting happens, I will make it into its own puzzle.

CAT: What engine are you using?

MARC: I have developed our engine from scratch. It's a real R&D project to develop all this technology, and a ton of fun! Making a 4D engine involved questioning every element of a 3D game we take for granted: what sort of objects can we put in a 4D world, how does the player interact with them, how do we program them, how do we make them look good, how does that relate to understanding the 4D? For example, in 3D games 3D models have a two-dimensional surface generally made up of triangles, but 4D models have a three-dimensional surface (made up of tetrahedra)!

CAT: What are the limits on possibility here? Are there any?

MARC: The limits keep getting pushed back as I figure out each feature! So yeah, there aren't many limits right now, we can build any shape we want (as long as it is not too complex, since it is slower to render). One thing that's a limit of the fourth dimension is that it takes exponentially more stuff to fill a space as you increase its dimension. It's a lot more work to make a 3D game than a 2D game, and even more work to make a 4D game! One way we solve that is by condensing the gameplay into relatively small environments.

CAT: What does it mean that we can now, if not physically, at least mathematically, explore the 4th dimension?

MARC: I think it's fascinating that there is this other type of exploration that video games open up. We've been exploring physical space for a long time (discovering new continents, going to the moon, building microscopes...), and now we can simulate and explore worlds that make sense mathematically, but do not exist in our physical universe (as far as we know).

Continue reading with Part Two of the Interview You can read Part One of the interview here: http://n4g.com/user/blogpos...

4d made me go wahhhh?

oooh this is so cool! I hope its pretty tough too!

Wow, my head hurt a lil' when the dev was describing how they worked w/ 4D from 3D.

Same here. I guess it's about as foreign as explaining 3D to something that may only see in 2D.

CAT: What engine are you using?

MARC: I have developed our engine from scratch.

Now THAT is impressive.

Wow it's not finished yet and already looks impressive to me.

This one is the indie that catch my attention most so far. The idea of a fourth dimension is really intriguing!

Not bad, but the graphics could be improved though

Weird how he says the puzzles set themselves up with the way it works.

I still don't get what 4D is. So basically, your character starts in a 3D world. Then, anytime he shifts/teleport to a new world, it becomes a 4D world?

Yeah, that part confused me too. I think this is just isometric 3D. :P

the whole 4d concept is interesting

I would really like to see more gameplay footage of this .

Reading this interview, the 4D concept actually looks very well projected into a working engine. I think a puzzle game is the perfect use of such a feature. This might be even more advanced than thinking with portals. Eh.. portals in a 3D world, that is.

So 4D is the dissection of 3D?

Lol, Cat's first question was mine exactly! When i first saw 4D i rolled my eyes a little but what he's doing is pretty interesting. Im not sure if ill be able to handle tho. Sounds way over my head.

Bit confusing for me, but looks cool either way.

I can already see this is going to be the kind of game that makes heads hurt. Challenge accepted.

With all the pre-built 'tried-and-true' game engines out there already, I find it intriguing that a lot of new games are using their own engine.

Too complicated of a read for me lol.

4D the next step in gaming.

Well, I'm certainly trying to wrap my head around 4D... trying! I think I need a visual example (guess I go look one up!).

Building your own engine must require serious talent

Wanna try this out.

never knew 4d was a thing, i thought it was just 3d regardless of what you do with it.

Man sounds like a lot of work this guy put into a concept that could fall apart at any minute. Good for him, breaking new ground.

4D? Wonder how they plan to approach this...

What I see is isometric 3D and I fail to understand what makes it 4D but I believe in the developer.
Impressed that he made the game engine from scratch!

Still don't Quite get it after reading the 4d explanation.
looked like a Hide and reveal 3d mechanism to me.

So excited! Lol good luck to you guys!

I need to play this.

Agree 0Disagree 0
▼✖-+
SPAMInappropriate
Show all comments (46)
The story is too old to be commented.
50°Fresh2

There Might Be at Least 3 Silent Hill Projects in Development