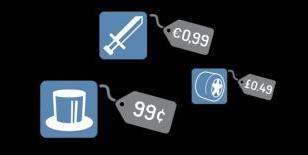 Micro Transactions, the Anaconda of the industry

So the hot topic right now is Micro Transactions and I'm seeing a lot of back and forth going on in the comment threads (as usual) and just decided to put my two cents in on it as well..

This is kind of a hit or miss for me..

I find it acceptable for F2P game-types because you get out what you put in. Game development does take time and money so I don't expect full games outright for free. If you like what you've played of the game you can decide what aspects to buy and how much you put in. Heck if you really enjoy the game and just want to support it you can even kind of think of it as a donation to the people who brought you an experience that you really enjoy.

What I don't find acceptable is charging the full $60 price on a game and then incorporating this business model on top of it. If you're going to do this then there should be a $30-$40 price-tag on the title, because then at least it wouldn't hurt so bad if you spent another $20 on in-game content. If you're charging the full price then the in-game unlockables should only be available through some kind of in-game (fake) currency. I do understand that some of these transactions are available through
in-game credits (or whatever they choose to call them), but they make them very hard to obtain, trying to lure the player into spending real money for the instant gratification rather than grinding for the in-game achievements. There needs to be a better balance.

This poses a very relevant question for the future of retail titles. Where do we go from here?

If it turns out that everybody buys into the little content on full retail titles this could very well turn into the norm. Oh, it's just a buck here or $5 here, or $60 for ONE freaking car!? Where does it end? Subscriptions on retail games?

I was genuinely interested in Final Fantasy XIV until I found out it was a subscription based game. I have a bunch of subscriptions at the moment as it is via Netflix and what-not that are already milking my card on a monthly basis as it is, so I just couldn't justify another monthly expense on a single videogame. At least it is an online only game and it does cost money to keep the servers running, but I can see businessmen seeing that this is a viable means of revenue and trying to implement it as well, just to see if it'll work.

I'm not criticizing one company or the other on this topic, although one definitely is trying to push this right out of the gate. I just don't want this to go over because if it turns out it works for one of them it's just a matter of time before the other follows suit. Vote with your wallets on this one please, I don't want this to be a standard practice for games that are already over-priced at $60 a pop.

NOTE:
I didn't include DLC into this, because I feel that that is another topic in it's own right. I also find DLC acceptable as long as it is an actual expansion of the game, not just small in-game items such as armor that should be available in the game in item chests or at item stores, not an actual real world marketplace using real world money. 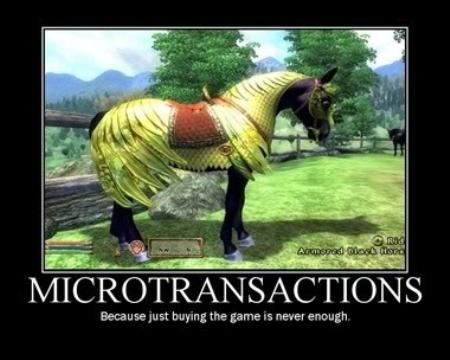 Like you said, if the game is F2P then this practice (while not the best) is at least tolerable, I mean come on they have to make money somehow.

However when you buy a full priced game, and log in only to see micro-transactions everywhere. That stings...a lot.

I agree that micro-transactions, meaningful ones I mean that have impact on the game, not just trivial, merely esthetic ones (that one can easily do without) shouldn't have a place in retail games.
I mean, in Killzone shadowfall there a pink zebra skin you can purchase for your bots, by no means it changes anything in the game, so I'm fine with that. You feinitely don't need to spend those 2$ if you don't care but when you have to actively purchase game content for a 60$ game, that's a no-no!

As for the price of download games, I think they have to keep the prices high to keep retailers at bay which does make sense if you look at it from that point of view.

Good point about the digital prices and keeping retailers at bay, never thought about it that way. Stepping on toes and what-not. Seeing as how Amazon can now offer digital content through PSN, maybe we can start seeing some competition through there at least. Hopefully other online retailers can follow suit and maybe we can start getting some deals!

Micro transactions can be done in a good way or a bad way. In a racing game if priced correctly I don`t mind if they have micro transactions, because some people are not that fortunate when it comes to free time. Thee isn`t really a reason why people with a limited amount of time that like to play a racing game have to miss out on 70% of the content simply because they don`t have much time to play.

Obviously there are also some stupid examples like Ryse singleplayer skills can be bought with real money when the game last like 5 hours or Dead Space 3 when it interferes in a big way.

Dead Space should be a survival horror game where you have to fight to get better weapons and ammo instead of just buying stuff and completely undermine what the game should be in an effort to squeeze more money out of you costumer.

Time shouldn't be an issue to shove in Microtransactions either. It may take longer before some unlocks the content, but that's how it should be anyways.

With time comes more responsibilities in life, and you have to value your priorities.

Cosmetic ones i have no problem with, but anything else is a problem.

I say it's only bad if the retail game has microtransactions that lead to pay-to-win. Then, it gets nasty. If it just provides cosmetics, then I say that's tolerable.

If the MT provides bonus xp/money, then it gets a little nasty.

If it's straight up perks in-game (be it whole new usables: cars, guns, planes, etc., or some other form of perk that are better than what is already provided), then we have a problem.

I agree 100% it should be purely cosmetic unless it's some kind of actual add-on content. Anything gained otherwise should be earned by playing the game. Play to win or pay us because we said so just doesn't fly with me. Not everyone has extra cash for aesthetics and they definitely shouldn't get punished by missing out on content just because they don't wanna hand over even more money after a $60 purchase. Unfortunately a lot of people just don't have that kind of money laying around, while some just have so much they don't even know what to do with.. but that's another story altogether..

I swear I prefer always online DRM and not having the ability to buy the games used than to have games become a micro transaction milking.

I hate that companies now want to milk the consumer as much money as possible without any effort whatsoever. They want to make services instead of products so they save as much costs as possible.

This industry is going to destroy itself by greed.

'What I don't find acceptable is charging the full $60 price on a game and then incorporating this business model on top of it.'

That pretty much sums the entire topic up for me.

Paying £5 for 4 costumes in DOA5 was the icing on the cake for me, when you played online if someone else hadn't paid for it they couldn't even see it.

Someone from the industry needs to speak out about the milking. I mean someone like Shuei or Miyamoto.

It has to be a statement like this "We believe giving our customers value for their dollar... Not decreasing value of our product in order to tack on a dollar here and there. Companies that try to pull the gears and solicit extra funds from gamers are inherently using a more fraudulent form of marketing. Actively offering an experience, but then holding back the reward unless you ante up more is almost extortion. In the world of video games where essentially you are paying for an experience, not a product that can be adjusted or put into a practical use, the use of microtransactions has only one direction to go: that in which the community will be disgusted and you eventually will make less money not more.... just look at CAPCOM."

If someone said something like this, someone with a closer look at the actual consumer adoption cost and overall profits, companies would listen and gamers would have a better foothold to demand whole experiences over chopped ones.

Micro transactions, micro management, Micro...$oft. All three things are bad and all have the word micro in it. Coincidence?

The PlayStation BRAHcast: Episode 22 - The Long Trek to Yomi

Saints Row developers discuss the game's reveal backlash, and bringing fans back to the series

Saints Row Is Shaping Up to Be a Fun Throwback - IGN