Choose your battles wisely on N4G 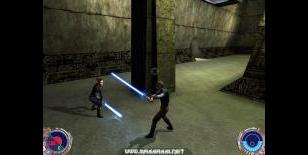 The old republic we deserved...

The old republic is going through death throws, its hard to see it living many years. I personally think this colossal failure happened as a result of a conservative publisher. EA sat back like the emperor and pulled its strings to make the game more bland.

Here is a description, with examples from other games, of how I think the game should have been designed.

They should have ripped combat directly from jedi outcast multiplayer. One for one, that game had the best jedi multiplayer of any star wars game to date. The force powers were great, the lightsabers were deadly, it was magnificent.

This kind of combat would obviously throw combat off with the other classes. Thats ok though you just have to give the other classes a point. Make bounty hunters the only other class that stands a chance against jedi one on one. Fill them with a plethora of weapons and give them a jet pack and a bunch of gadgets. Make smugglers fly ships and trade things. Make troopers part of a tactical military.

Have there be trooper/soldiers that are supposed to group with each other. Have this class specialize into other classes with heavy weapons, shield generators, snipers, etc. Set it up so a team of two or three is a balance to a single jedi or bounty hunter.

Then with the smugglers you make them stealthy traders. They shouldn't be designed for combat balance, they should be smuggling. Which leads me into the next area of the game, ships.

Then since the game has ships in it now (properly) a galaxy based economy similar to how EVE online works could be implemented. Smugglers are essential (could even change them to smugglers/traders depending on player choice) to providing other players with ship parts, weapons, droids etc.

This is about as far as I'm going to go with this for now. Obviously as I've described it there are still balance issues but nothing that would be insurmountable with a little creativity. What do you think?

Sounds great if you ask me. Too bad it didn't turn out this way.

I was going to post to say I disagree with the assessment of its quality, but like your ideas. I suppose the nuanced gameplay was the aspect that constantly stuck out to me as the weakness.

Bioware has the most successful sci-fi franchise of all time, creates entire new worlds with breathtaking scale, a jaw-dropping amount of voice talent, and yet still only wants to employ a few variations to the same formula? As much as I love the game, there could have been so much more creative risk taken with the gameplay. At least a million would have bought it with the name and CGI trailers alone.