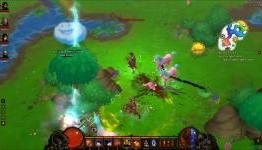 XMNR: Dedicated players are already ferreting out the secret levels contained in Diablo III and one revealed on Wednesday is Blizzard poking fun at gamers who complained that the game was too bright and cheery when it was first unveiled.

Just goes to show Blizzards change in ways and complete disregard for what diablo is suppose to be. D2's hidden level was a bunch of evil bipedal cows with giant axes, Now D3 is barbies horse adventures a la rainbows and clouds with happy faces. It looks like one of those low budget facebook games designed for 8yo's. Disgraceful.

Ya. You can totally base Blizzard's view of things based on an easter egg. SMH...

Riiiight.... Surely it wasn't done in a humourous fashion.

No, its to completely disregard one of their most beloved franchises.

They thought: "Let's take D3 in a totally different direction. You know what Dioblo fans hate? Sunshine and rainbows. Yeah... let's really show them how much we despise our loyal fans."

That makes much more sense than them simply having a little bit of fun.

Come on man. Are you serious?

9 year D2 vet and yes very serious. Diablo is suppose to be dark and serious in nature, if anything in the game can be laughed at then it shouldn't be in the game, easter egg or not. Even the colorful nature itself carries over into the normal game which proves its not just the easter egg that is off. None of the devs from D1 and D2 are even working for bliz anymore and it is plainly evident. Blizzard doesn't know what Diablo is anymore. they are just leeching off the name with this crap.

Master of the over reaction. Watch as this creature prepares and strikes, his attacks of irrelevant statements that are overly meaningless and are clearly weak validations of the creatures opinion.

The creature will continue to stalk his prey, continue it's constant attack of repeated, irrelevant information until its prey dies of aneurysm or stops listening.

FYI, some of the developers behind D2 went on to make Hellgate: London. It was possibly the biggest waste of money and time ever, I don't feel I got anything out of that. But how could this be? Some of these guys worked on DIABLO! Seriously dude, Goku would be disappointed in you.

The cow lvl wasn't exactly serious but it was dark in nature, not this colorful happy time crap with smiling clouds. Also it is not just the easter egg lvl that is the problem, the bright cartoony WoW art style is throughout the entire game. I was simply using this lvl as an example.

This is a good example of what D3 should have looked like.

And without the stat/skill systems being dumbed down to the point of the game practically playing itself.

Here is another new game called path of exile, Looks alot more like what D3 should have been.

"Just goes to show Blizzards change in ways and complete disregard for what diablo is suppose to be."

Please enlighten me on what Diablo is "supposed to be," because you clearly have more insight into the game than the creators themselves. If you don't like the game, then don't play it. I personally just finished Act III today with my buddies and have been having a blast since.

That is just the thing though, they aren't the creators. Same company does not equal same developers. All the devs from D1 & 2 have long since quit the company, $20 says none of the current devs have ever even played a Diablo game, if they had then they would never have insulted the franchise with this garbage.

Yeah because Hellgate: London was a real treat and Torchlight wasn't a cartoony family friendly looking version D1/D2. GET A GRIP.

@Ravenor Neither of those were meant to be Diablo. Different styles of games can come out of a single company you know. D3 isn't really a bad game in general, its just not Diablo. Look at the path of exile vid i linked a couple posts up and see what D3 should have been.

those poor ponies :C the music just fit the video, it made me laugh :D