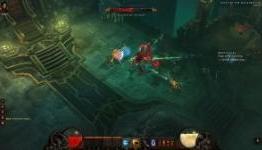 PC gaming owes a lot of its legacy to Blizzard, and particularly to the Diablo franchise. In the latest iteration, the journey to New Tristram is just as hellacious as before since Diablo 3 claws itself a place in your psyche… and wallet.

It reads more like a rant about things the reviewer doesn't like. Granted, the gripes seem to be legit, but I'd hardly call this a 'review'. More like, "here's a few things I really don't like about this game" while glossing right over a LOT of relevant info that readers would be interested in.

We're all entitled to our own opinions, and I'm certainly not about to accuse this site of trolling for hits, but this is one the biggest games to launch all year, and I'd say the review weighs in at around 500 words... seems like a game of this magnitude would constitute a little more effort on the part of the site/writer.

Disclaimer: I have not played Diablo III yet.

Given the launch issues, I doubt the game will be getting an actual review for some time.

In all honesty, based on my gameplay so far, there really isn't much to say about combat or gameplay, but I do agree you can't have a good review without mentioning it.

Inventory, this kind of got made into a money sink. Same with crafting. Looks like they want you to spend a lot of time playing the game to earn enough money to make everything rather than finding/unlocking them through normal gameplay. We're talking about farming items and money here outside of the normal questing, which really is alongside the usual farming people will do for unique items.

just like good reviews are glossing over major problems with the game.