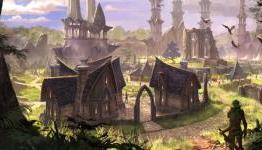 During the second era, in a time before any previous Elder Scrolls game, the world of Tamriel descended into a four-way war. In an attempt to conquer the continent, the Imperials – natives to the province of Cyrodiil – made a deal with the Daedric prince Molag Bal. At the beginning of Elder Scrolls Online, players join one of three factions that not only oppose the Imperials and Molag Bal’s undead army, but will also battle one another for the imperial throne. Elder Scrolls Online features three different alliances. Three different philosophies. Three different ways to approach the game. Which will you choose? Today we take a deeper look at the Aldmeri Dominion, represented by the Eagle on the ouroboros.

gameinformer.com
Meet the Aldmeri and Daggerfall factions of the Elder Scrolls Online enizr.comWhatsupdog
- Comments (0)+ Comments (0)
TopNewestOldest
The story is too old to be commented.
30°

The Elder Scrolls Online Expands Again and It's Impressive | COGconnected