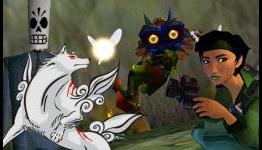 10 Underrated / Undersold Titles in the History of Video Games

GameDynamo - "We all know a few games that had a hard time making big cash for their developers no matter how brilliant they were, but here are our top 10 picks. "

gamedynamo.com
- Comments (21)+ Comments (21)
TopNewestOldest
Expand all
The story is too old to be commented.

HS sold quite well.
I'd say a game like singularity or Alice Madness returns would be better examples of good games that didn't sell.

There is a large abundance of Okami tattoos out there.

Yeah, it is. Especially since they could have fit it all on a single page but decided to split it up to get more hits.

It's not click heavy your right but that's not the point. It should have been on 1 page unless a huge amount of effort has been put in.

EDIT: the "top 8 playstation games" article is on one page. Not to hard to do.

it's just two clicks.. It's not like it's costing you anything except one additional point and click. Who cares if face book has to pay out a few extra pennies, it's not like the extra click will make them go bankrupt and you will no longer be able to connect with your friends online.

blah, dark souls should be number 1. also rayman origins should be on there and jade empire too

I love freespace and homeworld! This list could have been MUCH longer :)

To be honest, I don't think many of those titles were actually underrated. MM, BG&E, Okami, ICO and Grim Fandango are very frequently referred to critically. Crash Team Racing is something most people I know have played at some point, and Far Cry 2 sold well and got good reviews, even if people were a little disappointed once they had bought it.

As for criticising the list, I felt that the more I played FC2, the more I saw the same things happen over and over again. When the game revealed only a minor plot twist and then dumped a map the same size as the first one in my lap, I turned off the game forever. The multiplayer is quite good though I think, if a little unbalanced (running around with the grenade launcher is VERY satisfying, put it that way). I'm surprised by CTR, because I tried playing it the other day and PS1 games just don't hold up, you're far better off playing Mario Kart when you can't see more than a couple of metres in front of you. And let's face it, it's pretty similar to Mario Kart anyway.

Verdict: Didn't think it was a great list from an opinion perspective or actually meeting the description of the list.

Panzer Dragoon Saga and Suoikoden II should be on this list. Both are in my top ten of all time and both were hugely under appreciated.

Crash Team Racing is one of my favorite racing games of all time! So much fun. Really brings back memories of growing up.

Also, Beyond Good & Evil HD is on sale this week on PSN for like $6.99 I believe. I'm definitely gonna DL it once I get home. I've heard nothing but good things about it.

Where's Phantom Dust? As much as I was displeased with my xbox, Phantom Dust will always have a place in my heart. All the games mentioned are the usual suspects for these types of list, but PD needs more said of it. Get on it MS and I may buy one of your systems again.....maybe.....probably not but maybe.

far cry 2? no it was rated just right. it was buggy, the AI story director sucked, and in some cases blocked the player with continuing the story if you did something differently. The AI story director is a nice way into storytelling, but as with Oblivion, it just wasnt as great as promised. Granted they are some of the few games to really push the idea front and center.

Muramasa the demon blade was such an enjoyable title, could easily be on this top ten.

Starfield Delay Needs To Be A Lesson To Xbox